The Psychedelic Literature Newsletter and uses of "Black" in 2020

The global pandemic we're experiencing created so much uncertainty, so it was refreshing that some things remained predictable. And one constant in 2020 was C. Liegh McInnis's newsletter Psychedelic Literature (background on the newsletter here).

I've recently been working with my younger brother Kenton Rambsy to explore text mining projects with DH, so I decided to use Voyant -- a free text analysis tool -- in order to take a look at a full year of McInnis's Psychedelic Literature newsletter.

From January - December 2020, McInnis published forty-four installments of his newsletter. The issues totaled 282,971words with 10,031 unique words. Perhaps not surprisingly given McInnis's geographic base and interests, "Mississippi" and "black" were the two most repeated words across a year of newsletter entries.

Voyant includes a tool that identifies words used in close proximity to other words. I was most fascinated by the words that appeared new "black" in McInnis's newsletter. I had perhaps taken his usage for granted while reading, so text mining proved to be helpful for thinking about major trends in his writing.

This image shows four words -- "folks," "power," "lives, and "arts" -- that appear in close proximity to "black" throughout the body of McInnis's newsletters in 2020. The use of "black folks" (72 times) makes sense, as McInnis writes casually and with a connectedness to the people.

I was intrigued that he regularly used "Black Lives" (47 times), as it demonstrated that he was including events focusing on "Black Lives Matter," and he was also offering commentary on the strengths and limits of movements associated with "black lives." In 2020, he spent some time really working through the subject of whether "black lives only matter to black folks when they are taken by white hands," as he noted on August 15, 2020.

The frequency of "Black Power" throughout the dataset was based on the list of announcements that McInnis includes in every issue. There were several events related to the "Black Power Movement." The list also regularly mentioned a book with "Black Power" in the title. The book was particularly important since it focused on the 1970 killings at Jackson State University (this is the same university where McInnis works). 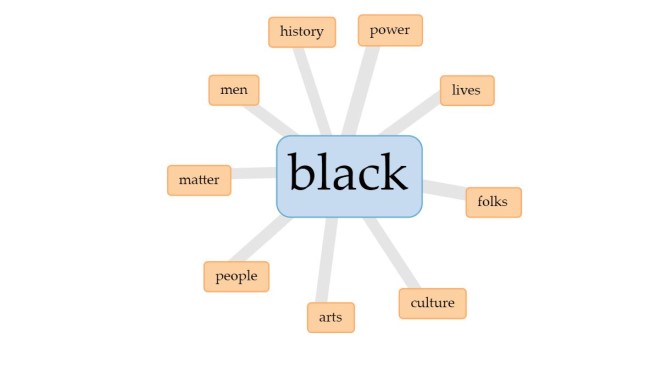 The above images shows additional words -- history, culture, men, matter, people -- that appeared in close proximity to "black" in the newsletter in 2020. McInnis is an active and prolific cultural worker, so it's perhaps no surprise that he often mentioned "black history" and "black culture" in relation to "black people."

It turns out that McInnis mentioned "black men" and "black women" (23 times each) throughout 2020. A close look revealed that he was generously citing my book Bad Men when he spoke of uttered the phrase "black men." So it turns out that text mining McInnis's newsletter reminded me of yet another debt I owe him.

While McInnis regularly addresses "white supremacy" (mentioned 77 times) and "racism" (mentioned 100 times), he also addresses problems within African American communities and actions of Black people. As far back as 2015, I noticed that McInnis was using this term "ineptitude" to reference what he viewed as poor and troubling decision-making as well as viewpoints. At one point in 2019, he noted that "white supremacy plus Negro ineptitude equates to perpetual black dysfunction and second-class citizenship."

In 2020, the phrase "black ineptitude" (mentioned 19 times) was a recurring and distinct phrasing in McInnis's newsletter. The formulation of the term emerges from a writer playing with or working through ideas concerning African American subjects and concerns. On the one hand, he discusses familiar phrasings like black history, black culture, black folks, and so forth. At the same time, he shows a willingness to come up with new, unique terms.

This semester in my African American literature course, my students and I have been thinking through the questions, "what is Black writing?" and "what do Black writers do?" McInnis provides me with some answers. Among other things, he demonstrates that in his case at least, Black writing involves prolific and creative engagements with "black."

Related:
• A Notebook on C. Liegh McInnis
• Background on the Psychedelic Literature Newsletter
Posted by H. Rambsy at 11:13 AM