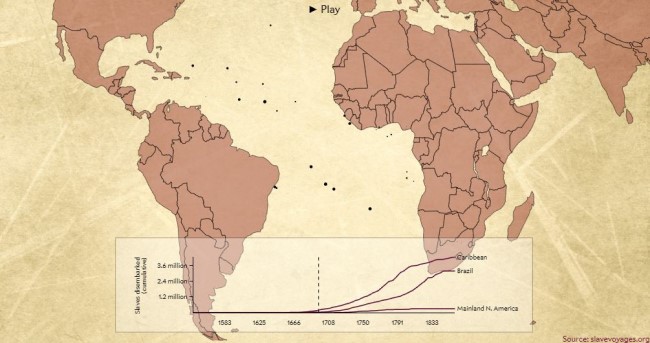 “The Atlantic Slave Trade in Two Minutes” interactive by Andrew Kahn on Slate in June 2015, represents a powerful possibility of collecting and showcasing data. The visualization displays 315 years and 20,528 voyages, through the use of small dots, of the Transatlantic Slave Trade. The two-minute interactive composition is at once compelling and troubling, for it is after all a distillation of the horrifying transportation of 10 million enslaved humans presented in two minutes.

“The Atlantic Slave Trade in Two Minutes” is an important data visualization and story. The project is the product of several years of research that began in the late 1960s when a group of scholars began collecting data about slave trade voyages. Subsequent scholars contributed to the expansion of the data. Today, the Trans-Atlantic Slave Trade Database provides information on more than 36,000 voyages, 91,000 people who were enslaved, and thousands of names of shipowners and ship captains.

The two-minute visualization makes the content of “The Trans-Atlantic Slave Trade Database” manageable and serves as a vital gateway into a rather massive body of information. It would take weeks, if not months, to individually trace each of the tens of thousands of documents that comprise the database. The display of so much information about the slave trade, presented in an interactive, 120-second visualization, indicate the power of innovative data management.

Of course, even a skillfully designed visualization like “The Trans-Atlantic Slave Trade Database” interactive gives us reason to pause. The use of small dots to represent slave ships and the truncation of 300 years into two minutes trivializes the horrors of enslavement. Thus, responsible creators and viewers must be prepared to consider how data visualizations can simultaneously enrich and suppress knowledge.

Related:
• A Notebook on Digital Humanities
Posted by H. Rambsy at 8:41 AM