The changing same of the Pulitzer Prizes 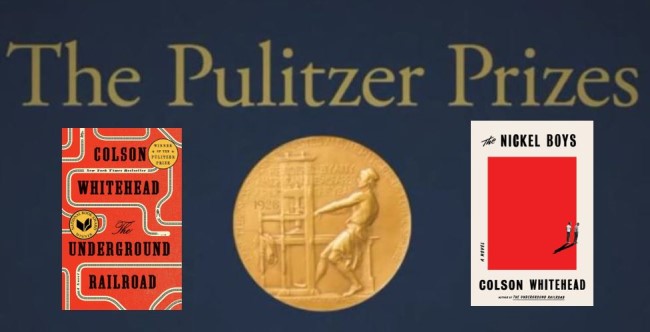 As noted on this blog earlier this week, Colson Whitehead just made history by becoming only the fourth novelist to win the Pulitzer Prize twice (alongside Booth Tarkington [1919 & 1922], William Faulkner [1955 & 1963], and John Updike [1982 & 1991]). History may rarely repeat itself, but larger trends surrounding awards like the Pulitzers do. This post offers preliminary musings about the relationship between “repeat” Pulitzers and racial dynamics.

First, some general points about the Pulitzers and Whitehead: Both of Whitehead’s honored texts—The Underground Railroad (published 2016, awarded 2017) and The Nickle Boys (published 2019, awarded 2020)—merit the distinction in this and many critics’ mind, subjective as awards criteria are. (The fact that Tarkington’s name today is likely to yield quizzical stares even among critics of American literature indicates this arbitrariness. Too, William Gass in 1985 railed against the Pulitzers in fiction for “tak[ing] dead aim at mediocrity,” representing well frequent public dissatisfaction with the prize’s choices.)

Nevertheless, Whitehead’s repeat awarding merits mulling, given the tangible outcomes such awards produce. Particularly in recent decades, these prizes yield notable increases in sales and enormous increases in the author’s visibility, enabling massive career gains with material consequences for future publishing, speaking fees and bookings, and the like.

Now to turn to how these points relate to race: Those effects attain for authors of all types. But their impact can be especially pronounced for writers of color, who are still less likely to acquire significant white readership without the cultural currency bestowed by such awards. As such, black authors’ receipt of such awards is certainly to be celebrated—hence the vast celebrations of Whitehead’s accomplishment on display this week on social media.

Whitehead is far from the first author to become a Pulitzer repeat awardee. In addition to the above-noted three fellow multiple recipients in fiction, 41 other authors in the prizes’ 104-year history have won two, three, or even four times. Any guesses about how many of those have been non-white authors? That’s right: in the seven “Letters, Drama & Music categories,”1 Whitehead joins only two other writers of color2 to have become repeat Pulitzer winners, alongside August Wilson (1987 & 1990) and Lynn Nottage (2009 & 2017).3

One is that the composition of the adjudicating committee4 impacts the likelihood of different types of authors (and different aesthetic styles of texts—a whole different beast of a topic) winning, with more judges of color tending to nominate and select more recipients of color. The other is that the criteria for selection and deliberation process are private, shielded from public scrutiny and likely quite subjective. Both factors impact all literary awards. And both can, depressingly, be invoked in implicitly racist claims that political correctness or the “culture wars” produce the general trend—however slow—toward the Pulitzer honoring more writers of color. (Numerically, its progress on that front has been slower than some other major awards like the National Book Award and National Book Critics Circle Award.)

However, some might be postulating that Whitehead as a repeat awardee did not “need” the increase in visibility to the same degree that other authors might. This feeling can yield complaints about any repeat recipients. I wonder (though have not had time to grapple with this more than merely anecdotally, via social media observations) whether such complaints about Whitehead might take on a distinct flavor of racism. It will be fascinating to see if any more thorough think-pieces about Whitehead will appear in the times ahead that attempt to mask that racism behind the supposedly “rigorous” critical language used in the academic culture wars.

Notes
1. The seven categories classified thus by the Pulitzer are: Fiction (called “Novel” 1917-1947), Drama, History, Biography, Poetry, General Nonfiction, and Music.
2. Also worth noting is the marked, equally unsurprising, gender disparity among this number, which includes just three women: Nottage, Margaret Leech (History), and Margaret W. Tuchman (Nonfiction).
3. In most categories (especially poetry), the tendency toward repeat awarding has decreased over time compared to the prizes’ earlier decades. So it is interesting that Drama seems to constitute an exception.
4. Gass’s 1985 diatribe also exhibits a sticky stance on the jurists: “Not only will they be partisans of their own tastes—that’s natural—each will be implicitly asked to represent their region, race or sex, because one will have to be a woman, another will have to be a black . . .”
Posted by H. Rambsy at 12:20 PM