Discovering Jericho Brown in 2008 (and then reading more) 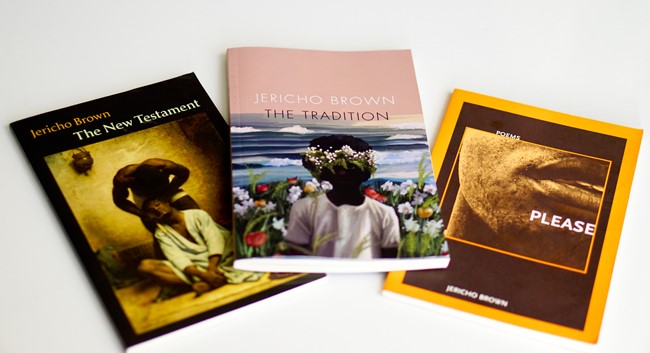 At some point in 2008, I received an email from my friend, the scholar Kalenda Eaton. She was informing a group of us that one of her former undergraduate classmates was releasing a volume of poetry, and she encouraged us to pick up a copy.

His name is Jericho Brown, she said, and his volume of poetry is entitled Please.

I was immediately interested for a couple of reasons. For one, I was committed to charting developments with contemporary black poetry. And second, I was aware that among the many volumes that people informed me about, only a few were by authors who attended HBCUs.

After reading Brown's poems in Please and in other venues, I felt like I had known him forever. We were both southern, attended black colleges, and several of his poems revealed that we had witnessed and retained some of the same things from black culture.

I finally met him in person in 2012. My friend Treasure Redmond invited me to a gathering of poets at her place, and there was Jericho. He had one of those wonderful, big southern laughs that fills a room. At one point, folks at the gathering read their poems.

Here's the thing: I don't remember what writing Jericho shared, but I do remember how vocally supportive he was of everyone else who read. He gave the loudest shouts of affirmation after every reader. I'm not sure if I had ever seen the most widely known poet in a room be the most vocal supporter of everyone else.

Back in 2008, I took note to follow Brown's subsequent works. Two years after meeting him in at Treasure's gathering, I got my hands on his second volume The New Testament (2014). The second book further confirmed our overlapping cultural links. But he was doing more than that. I noticed an even more experienced poet, playing with forms and ideas.


Too, The New Testament was my gateway to some other poets, including Rickey Laurentiis's Boy with Thorn (2015) and Phillip B. Williams's Thief in the Interior (2016).

In 2019, the folks at Copper Canyon Press sent me an advance copy of Brown's The Tradition. I really enjoyed reading and blogging about this, his third volume. He was building on his previous work, and clearly moving in new directions, developing a new form, and highlighting the vulnerability of black bodies.

In early 2020, Cynthia Spence from Spelman College and director of the UNCF/Mellon programs gave a presentation on our campus. At one point, she was mentioning various former Mellon Fellows. She asked the audience, "do you know of the poet Jericho Brown? If not, you will. He's doing really wonderful things." In retrospect, it's like she was predicting his Pulitzer Prize win.

Related:
• A Notebook on Jericho Brown
Posted by H. Rambsy at 3:04 PM