What follows are the texts and images from an exhibit on Frederick Douglass's Narrative that I curated today. 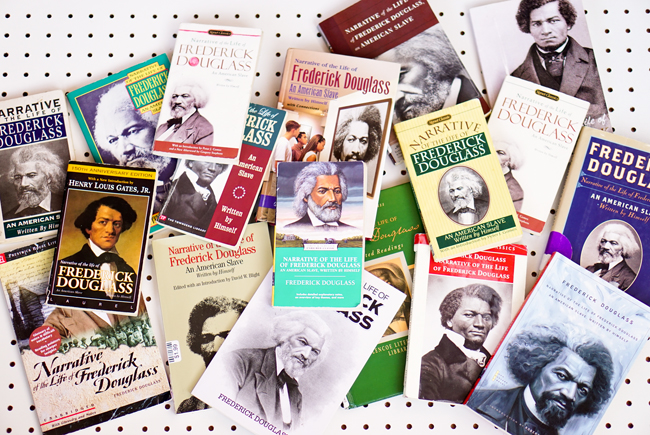 For a few years now, I’ve been collecting editions of Frederick Douglass’s Narrative of the Life of Frederick Douglass, an American Slave. As part of my larger, ongoing effort to share aspects of my personal library with a broader public, I decided to produce this exhibit to show and share some of my Douglass books.

Why so many editions? 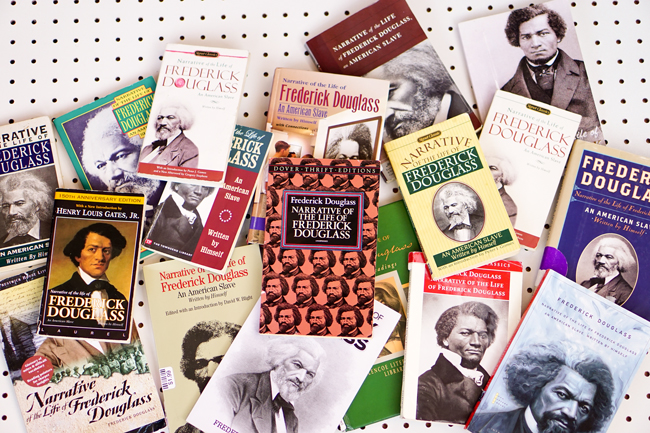 “Why so many different editions of the same books?,” people ask when they become aware that there are more than 400 editions of Douglass’s Narrative. One main reason, in addition to intrinsic value of the book, relates to the high demand for the book.

Since the 1960s when Douglass’s book was first reprinted, high school teachers and college professors regularly assigned the book in their courses. There are no copyright restrictions on the book, so any publisher that is willing and interested can reprint the book. Also, the accumulated general and scholarly interest in Douglass and the Narrative over time have accumulated over time. 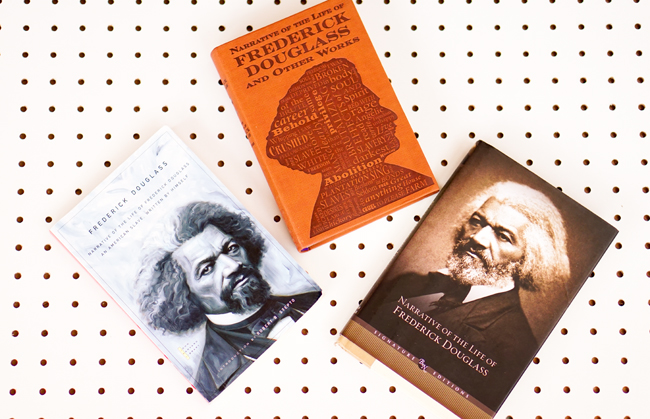 For years, I’ve been interested in Book History – a field where scholars study the promotion, production, reception, and circulation of print publications. My interest began with investigations of different versions of Richard Wright’s autobiography Black Boy (American Hunger), which was first published in 1945. I collected more than a dozen copies as I studied the evolving publishing and packaging histories of Wright’s book. My research on Wright’s autobiography inspired me to investigate Douglass’s Narrative, which gave me a wider time frame and a larger number of printings to consider.

The Barnes and Noble version 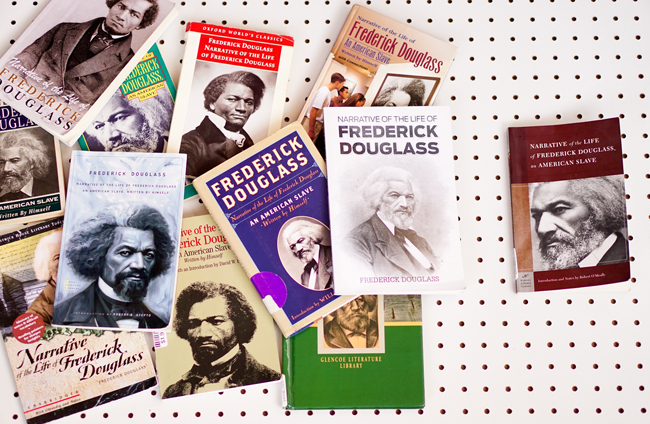 The 2003 Barnes and Noble edition is one of my favorite editions in part because I was in a position to acquire 40 of the books for first-year SIUE students (participants in FAME and GAME) in the summer of 2008 and then another 40 for a new group of incoming students in the summer of 2009. The cover design as well as the discounted price at the time for the edition made the book appealing to me. What better way to welcome African American students to college than by providing them with their own Narrative of the Life of Frederick Douglass? 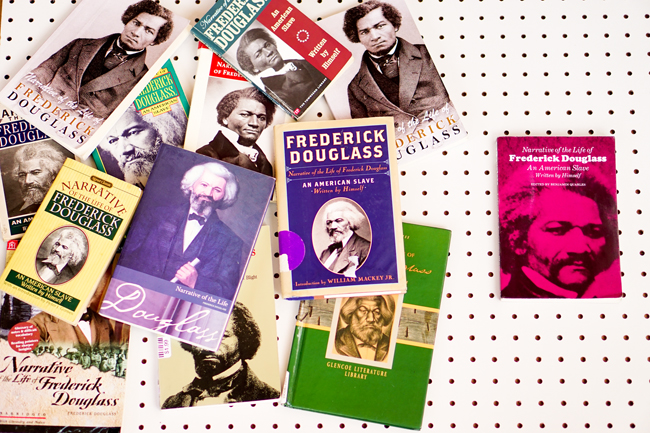 The 1960 Harvard University Press edition of the Narrative (1845) was the first modern edition of Frederick Douglass’s book in the 20th century. The Harvard Press edition remains a point of pride for those who value the contributions of scholars at HBCUs, because Benjamin Quarles, a historian from Morgan State University, wrote the introduction. 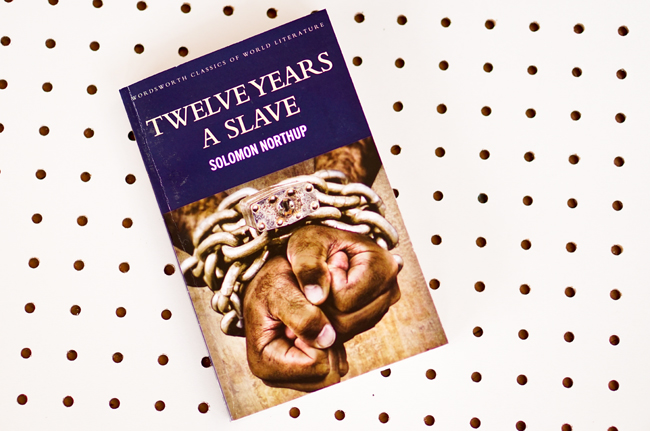 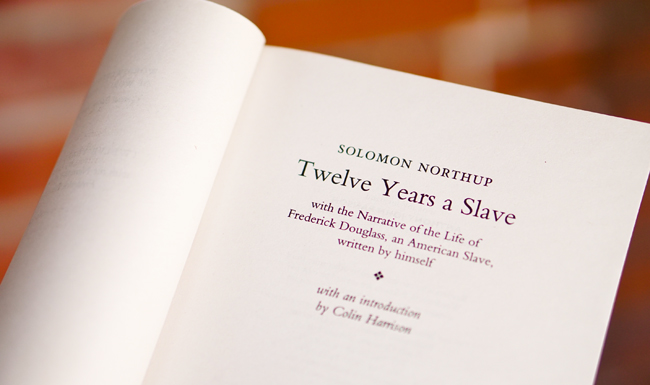 Hybrid books that include Douglass’s Narrative

Publishers produce these hybrids in response to the interest among educators of placing and teaching historical works “in conversation” with each other. 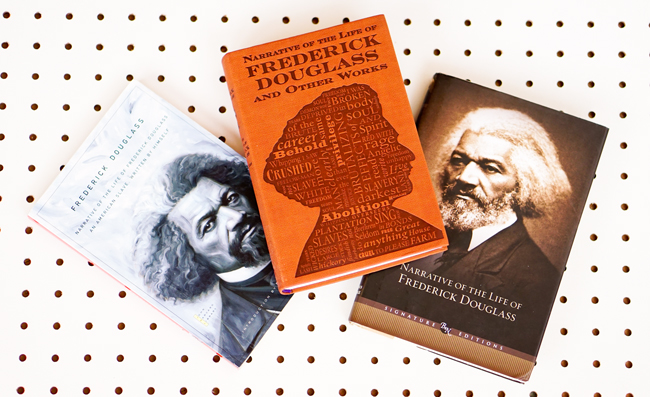 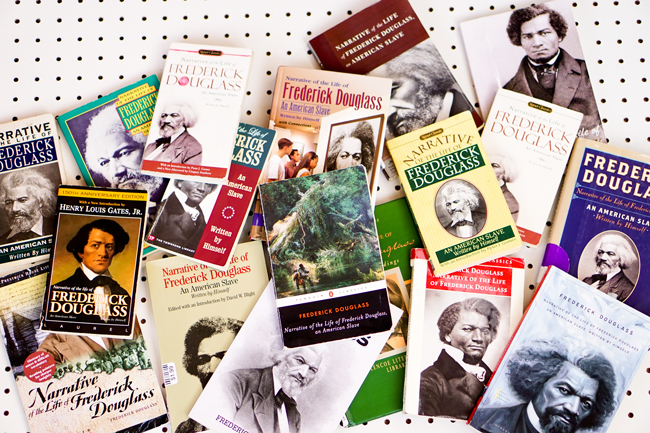