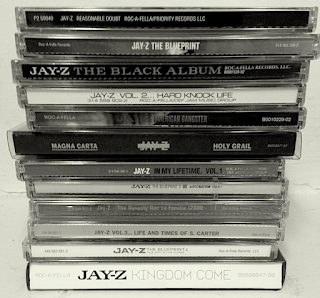 The high level of interest that students bring to the class has been one of the good things about a course like this. Several of the students arrived with a range of knowledge about hip hop and various rap artists. So they’ve felt really empowered about how their prior knowledge and experiences prepared them for this course. Also, more than any course, I’ve ever taught, students regularly bring their friends to class with them. -H. Rambsy

Even though many of my students and me are fans of Jay Z, this course has allowed us to understand another dimension of the rapper. Using text-mining software to quantify Jay Z’s language usage has been very exciting. It’s one thing to talk about Jay Z’s growth over the years, but actually pinpointing specific changes in his flow, his vocabulary, and song content clarifies the significance of him as well as a literary figure. -K. Rambsy

It seems the more knowledge one has about Brooklyn, pop history, and American culture in general, the more Jay Z’s rhymes and references resonate. Despite our previous familiarity with his music, my students and I have been making new discoveries. --K. Rambsy

I somehow under-estimated how much time would be involved in covering just a single song in the class. We’ll read, discuss, and then listen to lyrics, or we might listen and read, and then discuss. I’ve been surprised at how involved we can become in just one song. –H. Rambsy


So far, we’ve covered songs by Nas and B.I.G. We’ve just started a unit on Jay Z. I’m looking forward to delving more into his work. He has such a rich catalogue and expansive cultural influence, well beyond rap, so I’m curious about the kinds of conversations that we’ll have about him and his music, especially following our discussions of various others rappers. –H. Rambsy

We will begin building datasets on Jay Z’s four classic albums. We will track information such as frequently used words, numbers of similes and metaphors as well as references to locations and people. We will use this information to compare Jay Z’s work to other rappers and black male literary figures. --K. Rambsy