On June 15, the Toni Morrison Society (TMS) and Thornwillow Press hosted an event for members of the Society and people interested in book production to discuss the upcoming publication of editions of Song of Solomon that the press is producing.

The event consisted of remarks from TMS founder Carolyn Denard and Thornwillow founder Luke Pontifell. Denard, who founded the society in 1993, discussed her experiences working with Morrison and the TMS over the decades. She noted that since Morrison's passing in 2019, the TMS had shifted to the mission of "legacy work" -- coordinating projects and activities to honor the memory and contributions of one of our greatest authors.

It turns out that Pontifell had an encounter with Morrison on the subject of book publishing over three decades ago. There was a book launch party for one of the titles he was publishing, and Morrison was in attendance. She and Pontifell spoke, and she asked him how he chose his selections.

He recalled the moment, and said he stumbled through an answer. Morrison told him, he said, "what you print matters." That was the 1980s. Fast forward to today, and Thornwillow is preparing to produce an additional work by Morrison. Earlier this year, the press produced a book edition of Morrison's short story "Recitatif."

It's quite fitting that we will now have two expertly crafted editions of works by Morrison. During the event, Denard, and TMS president Dana Williams offered comments about how invested Morrison was in the production of books. Morrison was a former book editor, and she was involved in all aspects of the publishing from selecting authors, to editing, to production, to promotion. 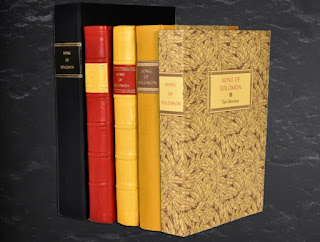 Denard recalled how Morrison told her how she kept prompting her publisher to redo the cover for Love (2003) until they got the color on the cover just right. Williams discussed letters that Morrison wrote to black women novelists that she was working with during the 1970s about the production of their books. Williams shows that the editor-novelist's correspondence reveals her attentiveness to a variety of issues pertaining to production. For Morrison, what and how you print matters.

At one point, Pontifell mentioned the relationship between book production and canonicity. He was on target as the availability of literary texts does have an effect on whether those works will be widely read and revered. There is always the matter of continuous engagement: reprinting, discussing, writing about, and re-presenting literary compositions so that further editions are deemed necessary. Put another way, so much depends on the nature of legacy work.

Note: The Thornwillow Kickstarter project for Song of Solomon concludes on June 23, 2021, so you would need to subscribe before then in order to retain an edition.

Related:
• Notes on the Enduring Legacy of Toni Morrison event
Posted by H. Rambsy at 4:11 PM