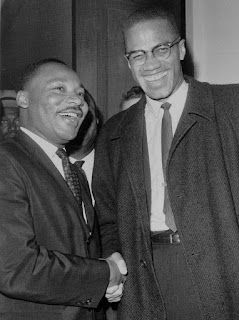 Among other things, the two central characters in The Nickel Boys had me thinking about Martin Luther King, Jr. and Malcolm X. We often view MLK and Malcolm as two somewhat opposing black perspectives. And the lead figures Turner and Elwood in Whitehead's novel bring those two to mind.

Elwood comes off as optimistic and naïve while Turner seems more cynical and skeptical. They are both in similar positions and become friends, yet their differences raises useful tension in the book.

Malcolm and MLK are hardly opposites, but for decades now, people have put further an either/or narrative about the two figures. King is associated with non-violent civil rights, and Malcolm represented with his militancy and "by any means necessary" rhetoric.

What if Malcolm and MLK had been confined to a school for boys in their youth? That's one way that we could read The Nickel Boys. Of course, MLK even has a presence in the book, as Elwood listens to and is captivated by recordings of King's speeches.

Whitehead advances that kind of history by presenting tensions between these two boys. Aaron McGruder presented even younger boys with his lead characters Huey and Riley. Representing two black male characters with tensions gives writers opportunities to creatively explore a variety of ideas.

Related:
• Colson Whitehead and The Nickel Boys in Context
Posted by H. Rambsy at 5:05 PM