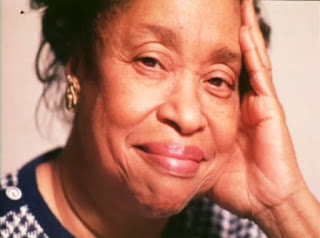 For several years now, I'm covered Margaret Walker's poem "Stagolee," about the notorious bad man, in my African American literature courses, especially the courses I teach comprised of first-year Black men students. I usually cover that poem and Etheridge Knight's "Shine" as opening poems in the unit I do focusing on bad men.

Moving forward, however, I plan to present Walker's "Stagolee" as well as her poem "Kissie Lee," about a woman who kills a man who had "done her dirt long time ago." In addition to presenting the poems as bad men and women poems, I will include the pieces as part of a unit on crime writing.

The last few years, the unit I cover on crime with my students has been their favorite. We usually talk about true crimes. The unit emerged as guys were constantly talking to me about gun violence cases, and in recent years, it seems every, I mean, every young Black woman in my class expressed an opinion about the infamous Kenneka Jenkins case. They are not alone; as some have reported, women have fueled the growth of true crime podcasts.

Poetry is usually on the sidelines in the discussions we are having, because relatively few notable poets we cover are thought of as covering the kinds of crimes that students find most troubling and captivating. We could definitely say racism is a crime, right? Well, there are many poems dealing with that topic, but somehow it doesn't come up as much in discussions of crime writing.

But Walker's "Stagolee" and "Kissie Lee" definitely fit within the conversations. Too, the poems, especially the one on Stagolee, demonstrate what it means for African Americans to hear about and continually pass along a crime story. The story of Lee Shelton (Stagolee) is one of our most famous murder ballads.

Producing tales about Stagolee and Kissie Lee empowered Walker to assume the role of crime writer.

Related:
• A notebook on Bad Men: Creative Touchstones of Black Writers
• A Notebook on bad men in poetry
Posted by H. Rambsy at 9:37 AM