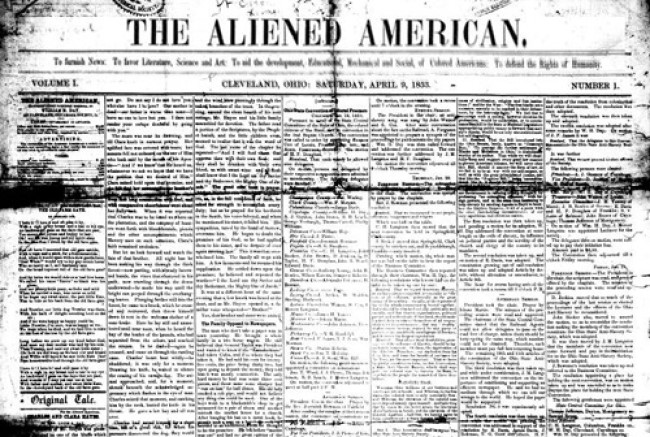 Yesterday, I attended a virtual session, "Roundtable on New Directions in African American Studies and Book History: Part 1." The event was sponsored by the Mahindra Humanities Center at Harvard. I attended in large part because someone made me aware that two scholars, Derrick Spires and Kinohi Nishikawa, whose works I follow, would be presenting. I've followed their work separately so I thought it would cool to see them presenting in a common space.

It turns out that I also got to check out thoughtful presentations by two historians--Rhae Lynn Barnes and Brenna Greer, who were also on the panel. Barnes discussed aspects of white supremacy, especially white people wearing blackface, and its print manifestations. Greer discussed the September 15, 1955 issue of Jet magazine, which was the issue that featured the famous, gruesome images of Emmett Till.

Spires presented on writers who published in The Aliened American, a Black newspaper from the mid-nineteenth century. Nishikawa discussed components of Aleshea Harris's play Is God Is (2016) as well as an audio production of the play in July 2020.

The four presenters were each giving brief talks on a specific artifact that they had selected.

Some of my research interests overlap with Nishikawa's, but I enjoyed thinking about the span of time and productions between Spires and Nishikawa. They both happened to be highlighting works by Black women and print culture. Spires concentrated on writers who wrote under pseudonyms, a practice that was employed widely and for purposes I was unaware of until I heard the presentation.

By the time Nishikawa presented, I expected to only be thinking about book history, but his discussion of ways that Harris's play suggested directions about sound had my mind exploring the convergence of print and audio.

I don't always have good things to say about the circumstances that have pushed us to Zoom. However, I was thankful that I got to attend a session like this one. This semester, I have caught presentations by Alondra Nelson, Ruha Benjamin, John Jennings, and others giving presentations in virtual settings, and now this roundtable. Outside of a conference, it would've been unlikely for me to catch these various talks in face-to-face settings.