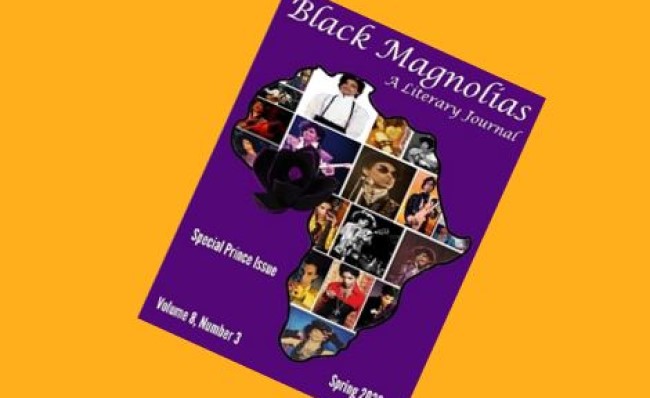 C. Liegh McInnis just published a special issue of Black Magnolias -- this one on the "artistry and life" of Prince. I've already started digging in.

Over twenty years ago when I was a student at Tougaloo College, someone made me aware of McInnis as a local writer in Jackson, Mississippi. Early on, I was told that he was a poet and writing a book about Prince. I knew many poets, but someone knowledgeable -- beyond the level of typical fan -- about Prince and writing about the music was new to me.

So of course, I felt like I was connecting dots when I saw McInnis opening the special issue on Prince with a quotation from Amiri Baraka's Blues People (1963). With that work, Baraka advanced the field of ethnomusicology, though folks weren't using that term much back then. The work on and around Prince that McInnis has been doing over the decades operates in the realm of black music studies. That means a realm that overlaps with black history and culture, but also with narratives about creativity, entertainment history, and more.

"With a collection of scholars from various discipline, this special issue," writes McInnis in the introduction, "tracks and attempts to analyze the meanings and transitions of Prince's lyrical work, musical progression, and fashion, taking into consideration that, to explore thoroughly Prince, one must realize his lyrics are but a particle of the interwoven package of music, fashion, and mythology that is Prince."

The special issue cover art by Monica Taylor-McInnis, by the way, deserves some mention. A collage of Prince photographs are situated within an image of the African continent. Like many major pop icons of his stature, Prince is sometimes positioned beyond race and history. But not here.

The cover prompts us to think of Prince in the context of black history and culture. The presentation of those several photographs encourages a consideration of the musician's multiplicity.