Nikky Finney and black poetry in 2011 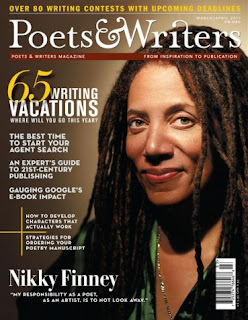 I'll soon turn my full attention to Finney's newest volume, Love Child's Hotbed of Occasional Poetry. Lately though, I've been reflecting to the release of her last volume Head Off & Split (2011). But beyond her volume, what else was going on with poetry in 2011?

Here's a checklist of some other volumes published that year:

Finney appeared on the the cover of Poets & Writers. Later, she was awarded the National Book Award for Head Off & Split. Sonia Sanchez was appointed Poet Laureate of Philadelphia.  (In 2012, Smith's 2011 volume was awarded the Pulitzer Prize for Poetry). In 2011, Barack and Michelle Obama hosted a poetry reading at the White House, with Rita Dove, Jill Scott, Common, and others giving readings.

Three scholarly works, that I know of, on black poetry appeared in 2011: Meta DuEwa Jones's The Muse is Music: Jazz Poetry from the Harlem Renaissance to Spoken Word, Evie Shockley's Renegade Poetics: Black Aesthetics and Formal Innovation in African American Poetry, and my book The Black Arts Enterprise and the Production of African American Poetry.

I recall that Young's volume Ardency received fairly extensive coverage, in ways that was uncommon for black poetry. Thanks to the coverage on Finney and others, 2011 became the first time that I began documenting the year in black poetry.