The Ghost of Black Women in Nikky Finney’s Poetry 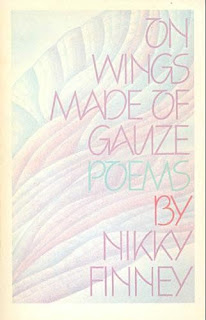 In preparation for Nikky Finney’s upcoming sixth book, Dr. Rambsy and I are doing a small series on Finney’s work. I am focusing on the ghost of black women in Nikky Finney’s catalog of work. I don’t mean ghost as in horror, although sometimes it is gruesome, but ghost as in the memories, stories, lives, and voice of other black women that Finney prioritizes in her poetry.

I’m quite familiar with Finney’s work and noticed the regular presence of ghosts or spirits as I re-read all of her poetry collections. Many people write about Finney’s incredible ability to create tenderness with political topics. While this is true and notable, what strikes me is Finney’s ability to present dead black women to tell or re-tell stories that were either silenced, erased, or forgotten. For me, it’s not just the tenderness and quietness and grace that Finney brings with her poetry, but the rage and remembrance too.

In the poem “Curry in the Morning” from her first book, On Wings Made of Gauze, Finney concentrates on a 14-year old girl who has committed suicide. The poem opens with a jump rope hanging behind a “worn and unfitting apron”. The little girl’s life unravels as she concedes to marriage and struggles to fulfill the too big role of a wife.

She constantly searches for resemblances of her childhood, seeing her jump rope and skate keys, but she realizes there are no more dreams “for women of fourteen”. More than that, she even asks to go out but is told no. She returns back to the room with the closet, where there is only the “security of the ironing board” along with her “jump rope of her youth”.

The 14-yeard old girl drapes the jump rope around her neck, reminiscing on how she learned to tie the perfect knot when she was a girl scout and hangs herself. Her last thought being that for once she did something without approval.

The rage in this poem comes from the defiant acts of the black girl. Although she “married him for consistency’s sake”, she held on to the artifacts that reminded her of herself. She took care to wrap up her skate key in cloth and tuck her jump rope behind an apron and ask for the opportunity to be out in the world. Although her mother and husband view her as woman, she clung tightly to the things that remind her of her childhood.

More than that, through Finney’s constant juxtaposition of the word woman/women with her age of 14, a level of discomfort on is emphasized. We, like the black girl, are forced to reckon with the impossible standards placed onto the child without ever forgetting her innocence. Similar to the way the girl cannot escape her circumstance, we cannot escape those reminders of her circumstances.

For this poem, there is only a jump rope, a too big apron, a child too young to be a wife, and a life dangling at the end of said rope. It’s haunting and unrelenting in its reminder of the violence committed against black girls.