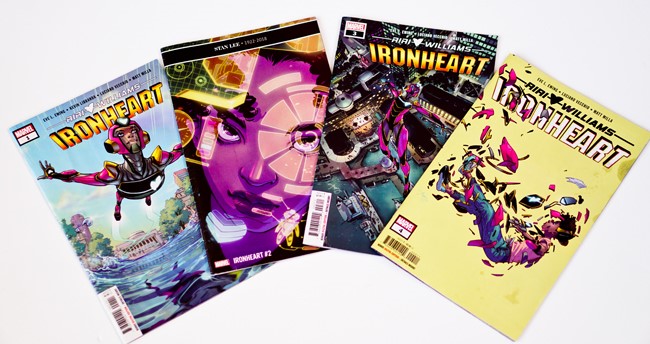 It's been a busy semester, so I haven't gotten enough time to blog about comic books. If I did have more time, I'd be writing more about Ironheart (Riri Williams) written by Eve L. Ewing, drawn by Luciano Vecchio, layouts by Geoffo, colors by Matt Milla. Kevin Libranda was a co-artist on issue #1.

I'm enjoying the story. Ewing is really developing this character Riri, showing her working in her lab, showing her on missions, showing her interacting with family and friends. Ewing is expanding our sense of the black girl protagonist, and also displaying what's possible when it comes to highlighting the intersections of race, technology, and heroism.

Amy Reeder Hadley has been producing wonderful covers for the series.  Riri's presence on the shelves of at my local comic book store is quite uncommon, where white male heroes are the norm. Seeing this black girl soaring in her suit, peering at various interfaces inside her helmet, and apparently falling out of her suit alters things in important ways. 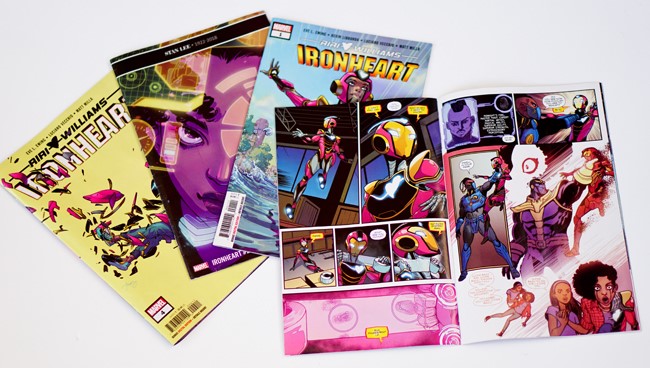 The artwork by Vecchio and Milla and layouts by Geoffo throughout the series are quite compelling. They depict a variety of settings and capably show Riri in exciting action scenes. There's all this vibrant energy with implied motion and colors with the comic that reward those of us who pursue repeated viewings.

There was this one scene from Ironheart #3 that shows Riri standing and facing a group of robbers in a store. They shoot at her, but their bullets bounce off of her armor. On the one hand, it's not an unusual scene in the history of comics, right?

At the same time, it was something...something rare to know we're viewing a black girl in a hi-tech, bulletproof suit that she designed herself repelling the shots being fired. Vecchio and Milla create this captivating scene, and many others throughout the series.


Ewing presents Riri moving back and forth between her hometown Chicago and Cambridge, Massachusetts, as she has a lab at MIT. Whereas Tony Stark has an artificial intelligence system known as J.A.R.V.I.S., Riri has N.A.T.A.L.I.E (or simply Natalie), which is also the name of Riri's friend who was killed as a result of gun violence.

The creation of Natalie as Riri's A.I. system is a really inventive idea on Ewing's part. What a surprise that we're now receiving this black woman A.I. system. The convergence of race and technology here had me thinking about Afrofuturism.

These days, people refer to things like "black girl magic" and the apparent Afrofuturism of artists like Janel Monae and a film like Black Panther. But back in the day (in this case the late 1990s) when I got into AF, we also talked about the concept in relation to the distinct things that black people do with technology and digital culture.

The transformation of a fatal gun violence victim into a holographic, black girl A.I. system definitely constitutes a special adaptation of technological and sci-fi concepts. It signals original and exciting thinking by Ewing. The notion of Natalie also raises fascinating ideas about what's possible when centering a black girl-inflected A.I. system.

There's a cool scene when Riri's mom asks her about her schoolwork. Riri informs her that "Natalie is going to lectures for me." We then jump to the Natalie hologram sitting in a classroom at MIT. It's cool to see a scene like that come to life in Ironheart.

There's frequent talk in the world of comics about diversity. Folks don't always discuss what it in concrete ways. Thankfully, what we're seeing with Ironheart is that diversity can mean that Eve Ewing, Luciano Vecchio, Matt Milla. Geoffo, and Amy Reeder Hadley collaborate to produce this fun and cutting-edge artistic composition.