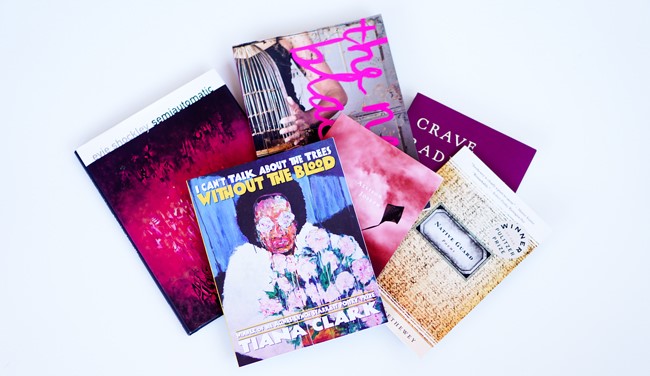 Last month during her reading, Tiana Clark mentioned a few different poets who've positively influenced her work. She noted folks like Natasha Trethewey, Terrance Hayes, and Roger Reeves. We could stretch far back too, as she has some Phillis Wheatley poems. Poets & Writers recently ran a piece featuring 14 debut poets, including Clark, and she offers a long list of influences.

I started giving some thought to other poets who came to mind as I've read Clark's work. Of course, my sense of what we might call her poetic lineages is subjective and constrained by my own limited reading selections. Still....

Off the top, while reading Clark's I Can't Talk about the Trees Without the Blood, I thought of Evie Shockley. I was aware that both Shockley and Clark grew up in Nashville, so that was likely on my mind, you know, thinking of them as, among other things, southern writers. In addition, Shockley and Clark are into playing with forms and taking their words all across the page.

The references to childhood memories and other daily explorations had me thinking of Clark alongside folks like Allison Joseph, Kevin Young, Elizabeth Alexander, and Marilyn Nelson. Nina Simone is central in Clark's book, so I no doubt recalled the late Monica Hand's volume me and Nina (2012). And hey, if we're talking about poets inspired by Simone and other black women musicians, then we're talking about a long line of poets. Nikki Giovanni on Aretha Franklin. Sonia Sanchez and Rita Dove on Billie Holiday. (Click here for a list of poets writing on black women musicians).

There's no way to get a handle on all the links and lineages. Like Clark said when giving her account of influences, "the list goes on and on."

Related:
• A notebook on Tiana Clark
• A short checklist of black women singers represented in black poetry
Posted by H. Rambsy at 8:24 AM