The Digital turn in Slavery studies 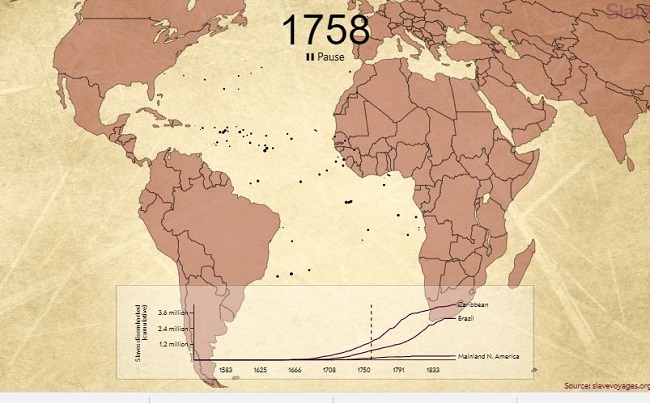 If you're talking public digital humanities  or technology projects with students in African American Studies, it's worth showing them Slate's "The Atlantic Slave Trade in Two Minutes" and at the same time introducing them to Britt Rusert's "New World: The Impact of Digitization on the Study of Slavery." Slate's visualization documents 20,527 voyages of ships transporting millions of slaves from Africa to America from 1545 to 1860. Rusert's article places the "digital turn" in studies of slavery into context, and she also highlights the limitations of the Slate video.

I was discussing Slate's and Rusert's pieces with students in the African American Literatures and Cultures Institute, a summer program that exposes students to a variety of topics in Black Studies. We began with a discussion of slavery, and the Slate visualization presents the subject in a tech-savvy way while Rusert's piece simultaneously gives students reasons to "think more carefully about how digitization transforms slavery’s status as a particular— even peculiar—object of knowledge within and beyond literary studies."

What does it mean, I wonder, that students and general viewers are more likely to encounter the Slate video as opposed to an article like Rusert's? Also, what lessons can we take, I asked the students, from the collaborative efforts among historians, librarians, and digital specialists who produced the Trans-Atlantic Slave Trade Database, which formed the basis for the Slate visualization? In other words, what are the processes and consequences of collaboration among humanities scholars and digital or tech specialists?

Related:
• A Notebook on African American Literatures and Cultures Institute
Posted by H. Rambsy at 4:37 PM