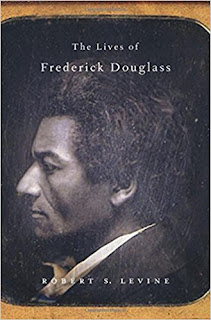 I've been enjoying reading The Lives of Frederick Douglass (2016) by Robert S. Levine, who makes a case for reading well beyond Douglass's Narrative (1845). Early on in the book though, Levine is raising some observations about Douglass and his book that have me rethinking some longstanding positions. Levine's research and writing also indicate some reasons why the Narrative is our most famous slave narrative.

So many people have highlighted the tension between Douglass and his one-time friend, the white abolitionist William Lloyd Garrison (and more broadly the tensions between black writers and white editors) that we tend to take such negative tension as a given. Not long after publishing the Narrative, Garrison and Douglass parted ways, and not on friendly terms. People view the relationship as troubling in part because in his book My Bondage and My Freedom (1855) and later writings, Douglass discusses how he felt mistreated by Garrison and his Massachusetts Anti-Slavery Society. Alright.

And here's where Levine makes an intervention, pointing out that "Douglass and Garrison had come to hate each other by the early 1850s, and that Douglass's 1855 remarks on the early to mid-1840s Garrison cannot be fully trusted" (39). Could it be that Douglass's dispute with Garrison led to the presentation of some, hmmm, alternative facts?

Levine makes a really compelling case. He shows that between 1841 and 1845, Douglass and Garrison in fact had a productive collaborative relationship. Garrison employed Douglass to give lectures for his anti-slavery society. Next, Garrison's group edited and published the Narrative, and they further offered really extensive marketing for the book and author in the society's publication, Liberator.

And you know, Levine reveals that Douglass didn't just give lectures and then later write a slave narrative. No, by tracing the speeches Douglass gave and newspaper coverage he received, Levine clarifies how Douglass utilized his lectures as a way of selecting, testing, and clarifying what he would write in the Narrative.

According to Levine, "we might think of Douglass's Narrative as emerging from a series of storytelling possibilities in which Douglass was given actual audiences (always important to the development of one's writing and speaking) and a set of assumptions about abolitionism which empowered him as a writer and speaker" (41).

Levine provides evidence on how Douglass, who had no formal education, needed and requested editorial assistance in those years just out of slavery. The ex-slave turned lecturer and writer received that assistance from Garrison and the Massachusetts Anti-Slavery Society. Levine also shows how actively the society publicized and marketed the Narrative. That early institutional and promotional support, I'm inclined to believe, raised the chances that Douglass's book would stand above the rest.

None of what Levine offers should be read as a way of diminishing Douglass's extraordinary achievements and brilliance. Instead, the project exposes us to "the productive role of Garrison and his antislavery society in the making of Douglass's first autobiography" as well as Douglass's "skill in negotiating his situation" working with the group and moving on "to new ways of telling his life story" (33, 36).