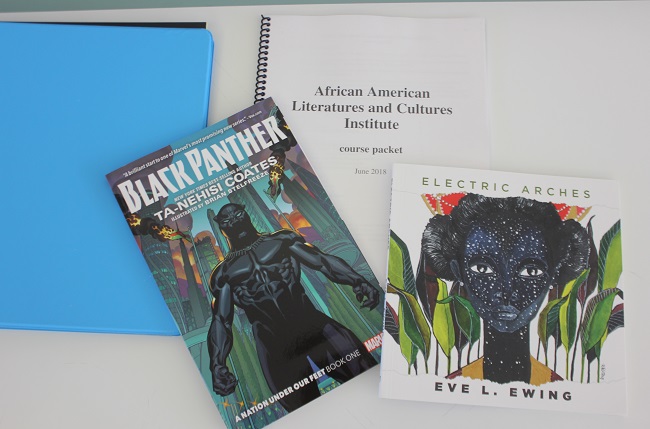 For the month of June, I'm working with a group of undergraduates in a summer program, the African American Literatures and Cultures Institute, that assists them with preparing for and thinking about graduate study. We'll cover a range of Black Studies readings, including Eve L. Ewing's Electric Arches and Ta-Nehisi Coates's Black Panther. A volume of poetry and comic book might seem like an odd pairing, but not really, given some of Ewing's and Coates's intersections on creativity.

I'm excited to see how students respond to works by both writers, especially as we think about them in the context of general readings on Black Studies. Check out syllabi in the field, and you'll see works related to history, sociology, and canonical literature. Less often do you see contemporary poetry and comic books.

In the introduction to her book, Ewing recalls playing outside during her childhood:


"As I rode my bike I would narrate, in my head, all of my adventures. In my head I was shooting arrows, exploring dungeons, solving mysteries. In this way, my block became the backdrop of infinite possibility, even if the cracked cement and the brick wall facing our window and the gangs seemed to constrain that possibility."

Her reflections on childhood imagining reminded me of passages from Coates's The Beautiful Struggle and some of his blog entries. He's written about his vivid mental wandering while growing up in a tough Baltimore neighborhood.

Hey, but look at them now. Ewing has this really exciting volume of poetry, with parts of poems appearing as if handwritten. Coates has been writing Black Panther for Marvel. What they're doing counts as Black Studies? Yes. Better question: what happens when we think of the kind of compositions that they've done as Black Studies work?  I'll keep you posted, as we read, think through, and respond?