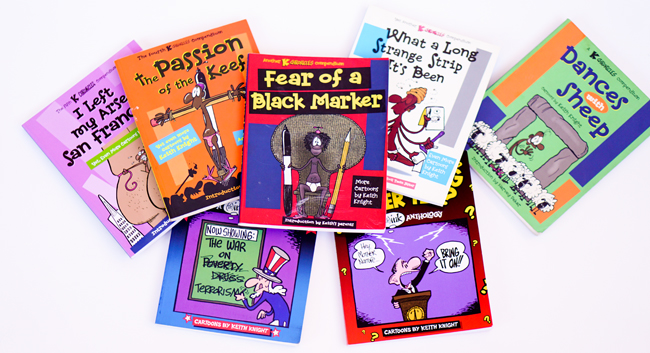 A decade ago, two of my students Marci Daniels and Tristan Denyers made a modest recommendation: you should read Keith Knight. What an important, far-reaching suggestion. Knight's editorial cartoons stimulated and advanced my thinking on some key subjects, and I have utilized his works in my classes and for cultural programming. It would be difficult to imagine my activities over the last ten years without Knight's work.

His cartoons cover a wide range of issues from politics and sports to entertainment news to the humorous occurrences in his daily life. His works have appeared in newspapers, and he has also published several books, based on his single panel editorial cartoons '(th)ink' and his comic strips The K Chronicles and The Knight Life. He's been quite prolific, as you can see from this bibliography of his works.


I've shared Knight's cartoons with folks in multiple contexts. In 2008, I coordinated a reading group with collegiate black men focused on Aaron McGruder's A Right to Be Hostile: The Boondocks Treasury (2003) and Knight's Are We Feeling Safer Yet?. Over the years, I've introduced students in various classes to Knight's cartoons.

When we cover Knight's work, there's always debate about the appearance of his images. Some of the students find his loony drawing style appealing, while others have strong reactions against the art style. What fascinates me is that his drawing, not just the topics, prompt lively discussion.

I value that Knight's work offers alternatives. In fact, that was the basis of Marci and Tristan making me aware of his work. I had initially been covering only McGruder's The Boondocks, but the suggestion to cover Knight opened new considerations and conversations about representation. Ten years later, I still have Knight in heavy rotation.

His (th)ink collections have been especially important for me. Those works concentrate on a wide range of topics, making it possible for me to really address a variety of interests among the students. Knight's vibrant creativity is made evident in his humorous treatments of political and serious issues. 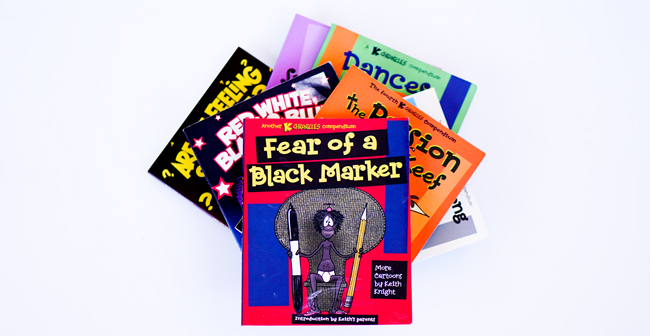 Over the years, I've really enjoyed the powerful and funny allusions that Knight creates in his drawing. The cover of Fear of a Black Marker channels the iconic image of Black Panther leader Huey Newton sitting in a chair. Newton holds a gun and spear, while Knight's character holds a marker and pencil. Humorous illustrated allusions like those permeate Knight's works.

Related:
• Keith Knight: A bibliography
• A Notebook on comic books
Posted by H. Rambsy at 9:14 AM