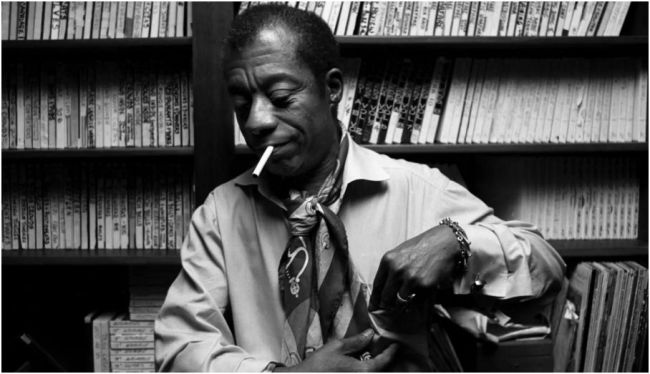 In my second class at the Dallas institute, I focused on Baldwin’s only collection of short fiction Going to Meet the Man. In this class, we drew on Franco Moretti’s concept of “distant reading” to discuss our observations about the writer’s overall body of work.

Even though many people in the audience were aware of Baldwin, I suspect that everyone had not spent as much time with his short fiction. We used Voyant Tools to read Baldwin’s work “from a distance” to get a bird’s eye view of the late writer’s work. Where close reading relies on subjective analysis of what a single piece of literature means, distant reading compiles objective data about many, many works. This method facilitated our analysis of recurring word choices and how those words correspond to various metaphors.

Overall, there is no substitute for actually reading a text and understanding how a writer uses words to craft a narrative. In the case of this class, however, digital tools proved to be beneficial. With only 2 hours in the course, digital tools facilitated our ability to gain a sense of Baldwin’s entire body of short fiction and focus on two specific stories as representative examples.

Voyant is useful for those people who may not have substantial experience in computer programming. We were able to use digitized texts to complete a range of functions such as identifying word concordances in his stories and creating visualizations to graphically model Baldwin’s work. The various interfaces helped us to place a special emphasis on his words. In short, we were able to perform a comparative analysis of all of Baldwin’s short fiction. 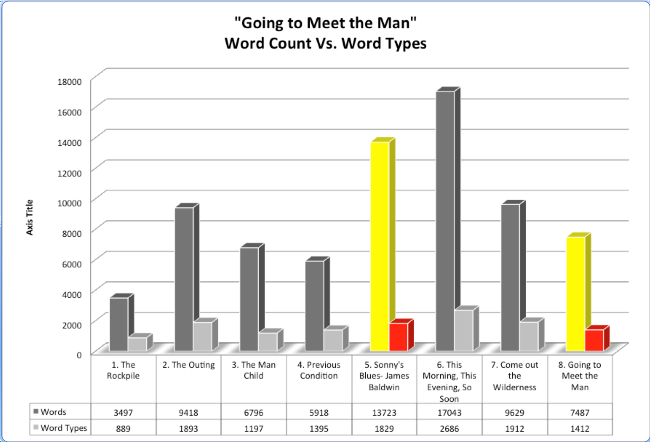 We focused on Baldwin’s stories, “Going to Meet the Man,” and “Sonny’s Blues.” In addition to being one of his most frequently anthologized short stories, “Sonny’s Blues,” (13, 723 words) is also one Baldwin’s longest stories, second only to “This Morning, This Evening, So Soon” (17,043 words). 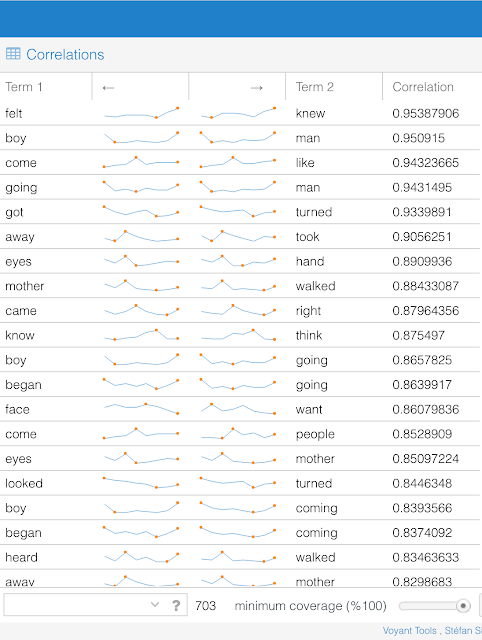 We began our discussion by using the correlation functions to assess the relationships with several recurring words throughout Baldwin’s collections. The correlation function is “a measure of how closely term frequencies correlate with scores approaching 1 mean that term frequencies vary in sync and scores approaching -1 mean that terms frequencies vary inversely.” Since “boy” and “man” were the second overall correlations, we had a discussion about the significance of Baldwin’s representations of male characters.

I showed audience members a chart I generated using Voyant. The chart uses bubbles to visually represent Baldwin’s deployment of gender specific terms throughout his stories. I created a visualization that charted words such as “father,” “son,” “brother,” “man,” and “boy.” The bubbleline function shows where the word is used throughout the stories. The larger the bubble, the more frequently the word is used at the particular instance. 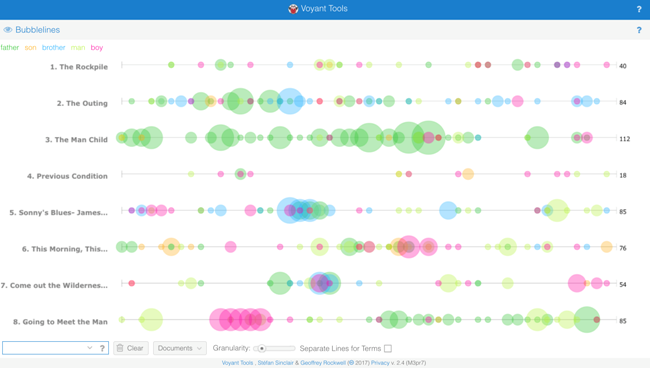 Our discussion of “Going to Meet the Man” and “Sonny’s Blues” gave us a chance to contrast his representations of male characters.

In “Going to Meet the Man,” Baldwin narrates a story from the perspective of a white police office. The officer is lying in bed with his wife. He seems frustrated by the growing racial tensions in town, and it’s affecting his ability to be intimate with his wife. He reflects back on a time when he witnessed a lynching of a black man. He recollects on the experience in an eerily manner as he describes his interactions with his father and other town’s people. The experience seemed as if it was a coming of age experience about how witnessing racism and contributing to racialized violence perverts white people’s sense of humanity.

In “Sonny’s Blues,” he follows an unnamed narrator who struggles to accept his younger musician brother, Sonny. Sonny fell victim to drugs and was arrested during a bust in Greenwich Village. After Sonny is released, his older brother reflects on his coming of age experiences with his brother. After attending a live show where Sonny was the featured instrumentalist, only then the older brother is able to understand how the spiritual significance of music.

In this class about Baldwin’s short stories, I wanted to highlight the manner in which Baldwin dealt with gendered interactions. Like Toni Morrison typically focuses on women characters and mother and daughter relationships, Baldwin primarily focuses on intimate relationships between male characters. Voyant Tools enhanced our discussions of Baldwin’s short fiction through the use of visual models.

Related:
• Reading James Baldwin in the Digital Age
Posted by H. Rambsy at 8:14 AM