Roberto Aspholm, one of my colleagues in Social Work, gave a presentation about the work he's done for years now related to street gangs in Chicago. His presentation was part of a series of presentations being organized by Jessica Harris, the new director of Black Studies.

Rob's presentation was both informative and somber. Too often, conversations about gangs concentrate on fairly recent occurrences. However, Rob began by taking the long view, taking us back to the roots and histories of gangs in Chicago. He pointed out that many gangs were initially backed by official political organizations, and he mentioned the transformations of black gangs over time in the city. He's also shared some of what he's learned interviewing various gang members. 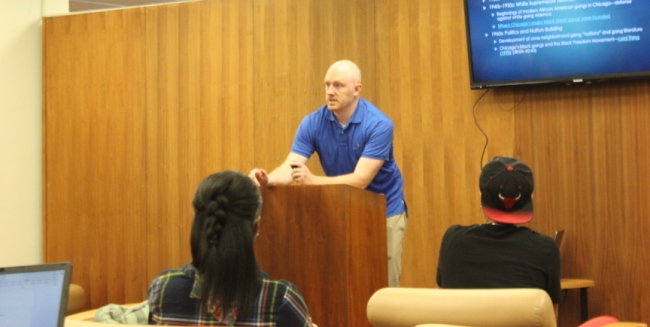 He gave lively anecdotes and some amusing responses to what he's noticed. For instance, at one point during the question and answer session, a student asked if it was dangerous for Rob, a white man, working in these tough neighborhoods. Rob countered, no, and in fact, because of various privileges, he said he was safer than some of the young black men he was working with in those environments.

What made the presentation somber had to do with the fact that there are no easy answers and solutions to the violence taking place. Rob gave one recollection of a group of guys going and committing a brutal murder immediately after leaving a peace treaty call in session. For some time now, I've been thinking and writing about narratives that we tell and don't tell about violence in black communities, and the presentation on Wednesday gave me even more to consider.

Related:
• A notebook on gun violence
Posted by H. Rambsy at 8:55 AM