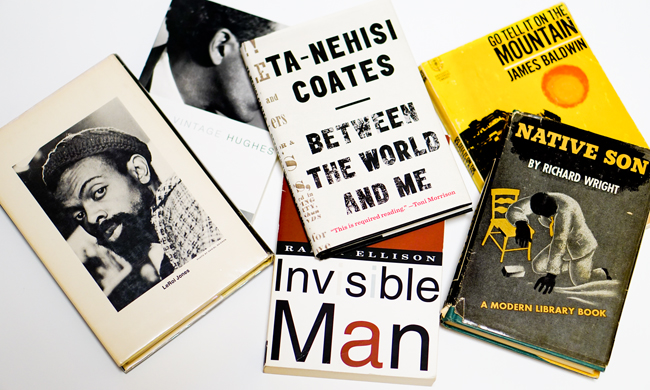 This past semester, I taught an African American literature course focusing on writings by Ta-Nehisi Coates, a figure I've read and blogged about for years now. My class was comprised of first-year collegiate black men, and we had wide-ranging discussions based on a variety of subjects related to our experiences reading Coates.

We covered several blog entries, "The Case for Reparations," Between The World and Me, and Black Panther...Book 1, along with supplemental writings, poems, and rap music by a number of different related artists.

One of the major challenges while preparing for the class was selecting a small sampling of blog entries from such a massive body of work. Coates has produced over 3,000 blog entries since the time he began blogging at The Atlantic in 2008. I went through the tough task of deciding on a notably small amount of entries to cover with my guys, settling in on about 20 entries to begin the course. Moving forward, it's going to take some time to pinpoint the most representative or useful selection of entries since Coates covered so much during that time span. Whatever the case, the students thought 20 entries were more than enough.

The guys were especially drawn to Coates's reflections on his days as an undergraduate at Howard University -- a topic he covered in blog entries and in Between the World and Me. The students were also intrigued by Coates's discussions growing up in a tough neighborhood and reflecting on those experiences from some distance. I suspect Coates's own experiences overlapped with those of the students, which prompted considerable comments.

In retrospect, the act of introducing the students, in their first weeks of college, to a writer who connected so directly to their own experiences was particularly important. Much of college, especially at a PWI, can be disorienting and alienating for first-year collegiate black men. Giving them familiar links through the readings was important for their high levels of engagement in the subject.

We covered selections from Coates's writings on Trayvon Martin and "Stand Your Ground" laws as well as journalist Trymaine Lee's coverage on Martin. The students were already aware of public protests concerning "Black Lives Matter" and police brutality, but the coverage by Coates and Lee gave the students a new, useful gateway into a broader body of writing that they were previously unaware existed.

More than half the guys in my class are from Chicago, so they were intrigued with the centrality of their city to "The Case for Reparations." They were especially interested in the histories of redlining and an argument based on reparations that addressed post-slavery injustices.

We closed the semester covering and discussing Coates's Black Panther: A Nation Under Our Feet Book 1 as well as Reginald Hudlin's Black Panther: Who is the Black Panther. Hudlin, by the way, grew up in East St. Louis, Illinois, near our university. Focusing on two versions of Black Panther gave enlivened our discussions by prompting them to consider different narrative and artistic treatments of a common subject.

African American literature courses often concentrate on novels, short stories, and poems. The course on Coates, however, made it possible for me to place blog entries, articles, and comic books in the foreground.

Related:
• A notebook reflecting on reading and blogging in 2016
• Collegiate Students
• Ta-Nehisi Coates
Posted by H. Rambsy at 9:08 AM