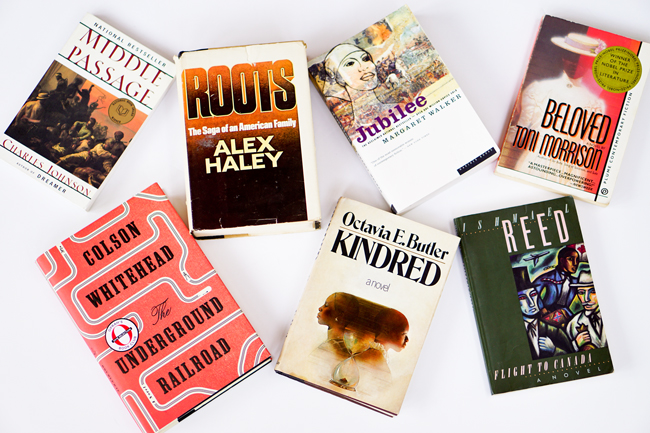 If you haven't noticed, Colson Whitehead's The Underground Railroad has received a considerable amount of attention since its publication in August. In addition to individual accolades deservedly bestowed on Whitehead for his new novel, we might consider the ways that his book signals the continued achievements of neo-slave narratives and more broadly the practice of various kinds of modern and contemporary black writers producing compositions about slavery.

In interviews with Whitehead and in commentary on The Underground Railroad, there are mentions here and there of Toni Morrison's award-winning novel Beloved (1987). Yet the interest among novelists in taking up the subject of slavery is far more extensive. Margaret Walker's Jubilee (1966), Alex Haley's Roots (1976), Ishmael Reed's Flight to Canada (1976), Octavia Butler's Kindred (1979), and Charles Johnson's Middle Passage (1990) are a sample of modern works that address slavery. Those and other works comprise the creative context from which a novel like Whitehead's The Underground Railroad emerges.

Among creative writers, novelists generally receive the most attention for their books about slavery. However, poets have collectively produced the largest body of works on slavery. For more than a century and a half, black poets produced poems about slavery.

Whitehead consulted slave narratives, most notably The Narrative of the Life of Frederick Douglass (1845) by Frederick Douglass and Incidents in the Life of a Slave Girl (1861) by Harriet Jacobs while writing his book. He read interviews from the WPA Slave Narrative Collection, and he also read or re-read scholarly books on slavery such as Bound for Canaan: The Epic Story of the Underground Railroad, America’s First Civil Rights Movement (2005) by Fergus M. Bordewich and The Half Has Never Been Told: Slavery and The Making of American Capitalism (2014) by Edward E. Baptist.

Representations of slavery constitute an expansive creative domain that provided Whitehead and many others with a wealth of artistic options, not just historical ones.

Related:
• Poems about slavery and struggles for liberation
• Colson Whitehead
Posted by H. Rambsy at 8:18 AM