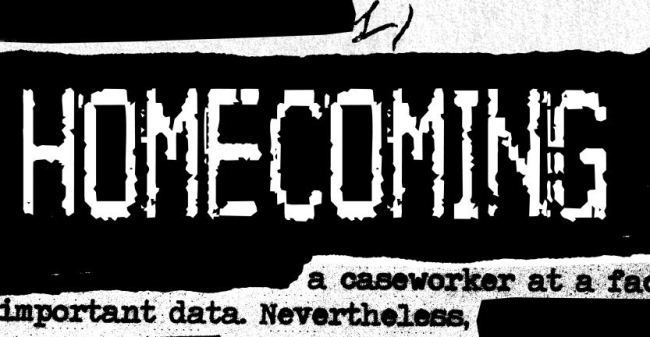 I've been listening to podcasts for some time now, and recently, I've been especially tuned in to Homecoming, a fictional narrative described as "a psychological thriller." The show is produced by Gimlet Media. Among other qualities, what makes the show particularly captivating concerns the uses of conversations -- specifically, dialogue between two people -- to advance and intensify the narrative.

The story is about Heidi Bergman (actress Catherine Keener), a caseworker for a mysterious program known as the Homecoming Initiative that is designed to reintegrate soldiers into American society after returning from war. We listen in on Heidi as she's speaks with a program participant Walter Cruz (portrayed by Oscar Isaac). We also listen in on snippets of conversations as Heidi speaks with her boss, with her mother, with her boyfriend, and with her coworker.

The story is not linear, and there's no narrator to provide overall context. Instead, we must rely on what we overhear from the brief conversations that Heidi has with others in order to piece together what is taking place with this Homecoming Initiative.

Walter is told, which means listeners are also led to believe, that the facility for the Initiative is in Tampa, Florida. Yet, one fellow solider and patient raises questions about whether he, Walter, and other participants are being misled to believe they are in Tampa, when in fact they are somewhere else that the organizers for the Homecoming Initiative choose to keep secret. The soldier's skepticism and paranoia prompts us to question the reliability of the facts as well.

As we listen to phone conversations between Heidi and her overbearing boss Colin (David Schwimmer), we sense that Heidi cares about the well-being of Walter. Yet, we are not yet fully aware of what experimental practices are being used to treat the soldiers in the Homecoming Initiative. Our strong feeling that there's something important, maybe even sinister, just out of view (or earshot) is what makes this story a thriller.

What interests me is that the thrill results from the act of listening to conversations.  So many of the thrillers that we are exposed to take place on the big screen and on television. There are explosions and car chases and other modes of visually stimulating action.

But here with Homecoming, the narrative's writers -- Eli Horowitz and Micah Bloomberg -- as well as the sound designer -- Mark Phillips -- are telling a story, or more precisely, letting us listen in on conversations as we construct our understanding of a story that is slowly, week-by-week being revealed to us.

"I wanted a whole plot where the actual meat of the story was the conversation,” Horowitz informed a reporter for the Times. Horowitz have accomplished that. Homecoming has had me thinking about the art and consequence of conversations.
Posted by H. Rambsy at 4:18 PM