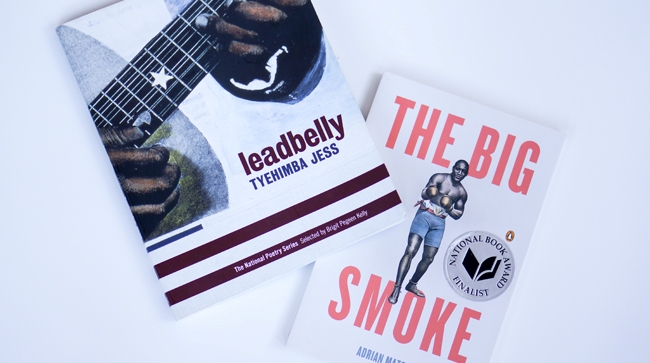 I've read, re-read, and blogged about a large number of poetry volumes over the years, so trying to pinpoint just a few that I would recommend is tough. Nonetheless, to get started, I'd mention the following works, which I've found myself returning to and references on many occasions. Clearly, this list is not exhaustive.

• Adrian Matejka’s The Big Smoke (2013) -- A collection of persona poems written primarily from the perspective of the first black heavyweight boxing champion, Jack Johnson. Given my interests in representations of bad men, I find myself frequently come back to this volume by Matejka. [Reading group on The Big Smoke.]

• Elizabeth Alexander's Crave Radiance (2010) -- I've followed Alexander's writing and career for quite some time. This collection brings all her volumes of poetry together.

• Evie Shockley’s the new black (2008) -- A really inventive book by a thoughtful, engaging poet. This book was inspiring and challenging in useful ways.

• Tyehimba Jess's Leadbelly (2005) -- What Jess does here is narrate and re-create the journey of the legendary folk musician Huddie Ledbetter. It's hard to think of a single volume that has done more to set me on my way thinking about bad men, persona poems, and the convergence of poetry and music.