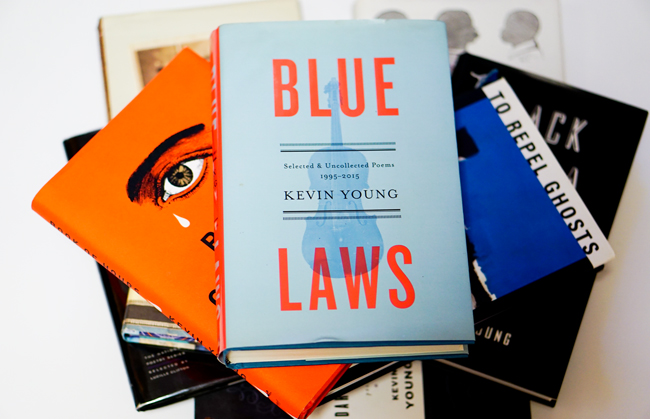 At 608 pages, Kevin Young's Blue Laws: Selected and Uncollected Poems, 1995-2015 (2016) is massive. The book contains approximately 275 poems. Nonetheless, Blues Laws hardly contains all of Young's works. As the subtitle suggests, the book represents "selected" works. A full collection of poems from all his volumes would be far more expansive than the current publication.

Young has had a remarkable publishing career so far. In addition to his 9 poetry volumes, Young served as editor of 8 books, and he authored one book on nonfiction: The Grey Album: On the Blackness of Blackness.  Unlike many contemporary poets, almost all of Young's books appear in hardcover and paperback. Blue Laws contains several previously unpublished poems, including a series "Homage to Phillis Wheatley." Overall, Young's new collection is a record, partial record of his relentless productivity.

Related:
• A Notebook on Kevin Young
Posted by H. Rambsy at 1:20 PM