Colson Whitehead: The art of thinking with metaphors 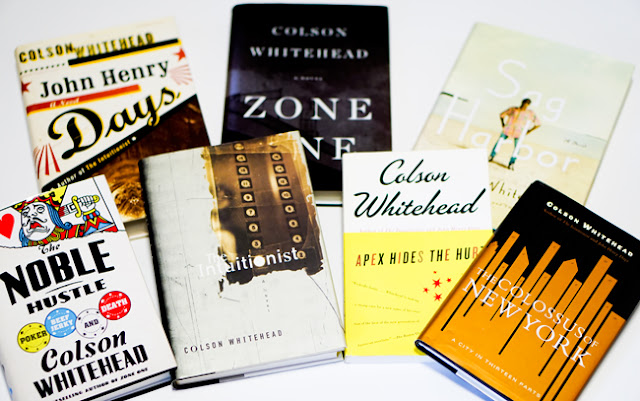 Colson Whitehead's allegories, or extended metaphors, are a signature feature of his works. Indeed, he often writes about one thing while invoking the terminology and experience of something else. He's also good at merging different subcultures or discourses, which enhances how he works through with metaphors.

His first novel, The Intuitionist (1999) about elevators invokes the language and experience of racial uplift. Or maybe, it's a novel about racial uplift that makes use of concepts associated with the field of elevators. Either way, his narrator displays knowledge about the politics of race as well as the histories of vertical transport.

Whitehead's second novel John Henry Days (2001) juxtaposes a 19th-century, steel-driving man who competes against a machine with a late 20th/early 21st-century publicity or junket journalist who competes against, well, the machinery of his profession. In Zone One (2011), he writes about the aftermath of a zombie apocalypse, where people are struggling with Post-Apocalyptic Survivor Dysfunction, or PASD. Of course, "PASD" is a metaphor for people struggling with the "past," which like zombies, remains undead.

Whitehead's reputation as an extraordinarily talented literary artist rests on his deft ability to bring together seemingly unexpected ideas such as elevator inspection and racial problems or John Henry and a contemporary junketeering journalist. Our everyday language, scholars such as George Lakoff and Mark have noted, make sure of all kinds of metaphors. But not all metaphors are created equal. The nature of metaphors deployed by Whitehead in his novels and essays require the type of decoding that subsequently leads commentators to assess the author's writing as "cerebral," "intellectual," and "brainy."

Those assessments and labels have been consequential in the processes of conceptualizing Colson Whitehead as a leading novelist.

Related:
• Amiri Baraka's Metaphors and Ferocious Name-calling
• A Notebook on Colson Whitehead
Posted by H. Rambsy at 10:51 AM