Students in our courses on rap music were surprised to learn what one Jay Z’s most uttered words was on his first album Reasonable Doubt (1996). More than “nigga” and money, more than cars and drugs, the word that Hov spoke most frequently on his album was “like.” (That doesn’t include stop or functional words such as “is,” “a,” “to,” “the,” etc).

Jay Z’s repeated use of “like” (75 times) throughout the album signals his fondness for similes, a qualified metaphor that connects dissimilar things. In “Dead Presidents II,” Jay Z boasts that his money “accumulates like snow,” and later, he notes that he’ll make his rivals “fold like bad hands.” In “Can’t Knock the Hustle,” he says “we do dirt like worms” and “produce G’s like sperm.”

Only after analyzing Reasonable Doubt using the text-mining software tool Voyant Tools did we become aware of the high frequency of “like” on the album. Jay Z uses approximately 66 similes using "like" on Reasonable Doubt. Our realization of the presence of so many similes in Jay Z’s lyrics led us to pay attention to his language usage in new ways. We began to classify his similes in order to track what type of comparisons he was more likely to make in his songs. 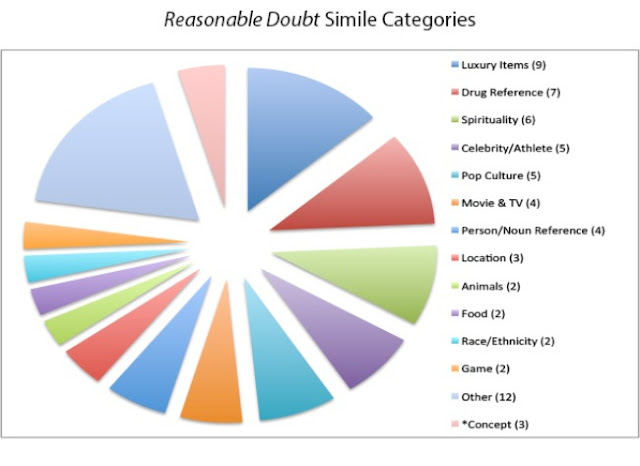 On Reasonable Doubt, he uses similes most often to make comparisons between luxury items (“You niggas know the time like Movado”), drugs (“you’re copping me like white crystal”), and spirituality (“meditated like a Buddhist”). Jay Z uses “like” the most—13 times—on his song “Cashmere Thoughts,” with six of those similes referring to luxury items.

References to celebrities are also integral to Jay Z’s use of similes. Three of the five prominent cultural figures that he discusses in similes are athletes: NBA legends Michael Jordan (“Nobody want to be like Mike where I’m from”) and Hakeem Olajuwon (“High post like Hakeem”) as well as tennis player Pete Sampras (“Serve like Sampras”).

The similes pertaining to luxury items and drug references seem fitting given Jay Z’s background as a drug dealer; however, as our chart shows, Jay Z also presented comparisons to a number of other subjects. His stories are filled with comparisons to pop culture references such as MTV (“unplugged like MTV”) and Friday the 13th (“I sense danger like Camp Crystal Lake”). The variety of concepts that he referenced using similes contributed to the lyrical depth and his ability to connect seemingly unrelated topics on his first album. Overall, the similes offered evidence of a clever, then-emergent lyricist capable of connecting his coming-of-age experiences in Marcy Projects to the rest of the world.