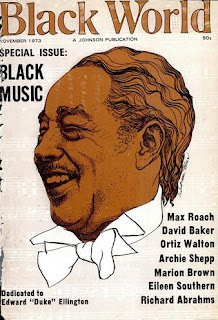 The editors of Negro Digest/Black World displayed an interest in developing a distinct cultural calendar, dedicating issues to specific topics.

In addition to the annual poetry issues in September,  Negro Digest/Black World, regularly ran an annual history issue in February. The magazine ran an annual fiction issue in June; the issue was referred to as the "fiction festival." Each April, the magazine ran special issues on theater. The November 1973 issue was designated a special on "Black Music." An image of Duke Ellington appears on the cover.