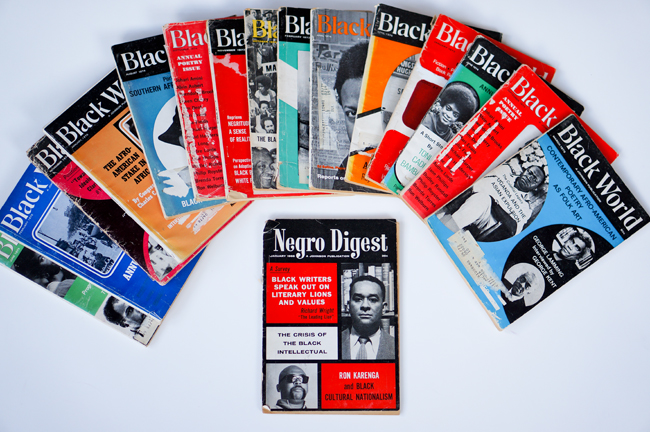 "Google has added a magazine rack to its Internet search engine. As part of its quest to corral more content published on paper, Google Inc. has made digital copies of more than 1 million articles from magazines that hit the newsstands decades ago." --Michael Liedtke, Associated Press, December 2008

The owner of Ebony, Jet, and Black World/Negro Digest magazines allowed Google Books to "index their files." Popular Mechanics, Popular Science, Life, and many other magazines are also included in the massive trove of materials now available online through the service from Google Inc. In return  for the content, Michael Liedtke noted that Google agreed, among other things, to "share some of the revenue that is expected to be generated from ads shown alongside the old articles."

John H. Johnson, who died in 2005, was the founder of Johnson Publishing Company, which owns Ebony, Jet, and Black World. Representatives for the company apparently negotiated the deal with Google. Hence, we now have access to issues of Black World/Negro Digest from November 1961 - April 1976, when the magazine closed.

It may have been more accurate to label the project Negro Digest/Black World, since the publication was first entitled Negro Digest, modeled after Reader's Digest. Johnson founded Negro Digest in 1942 (the note from Google Books includes the line "Founded in 1943"). The periodical ceased publication in 1952 because it had become unprofitable. Alternatively, Johnson's magazine Ebony and Jet, launched in 1945 and 1951, respectively, flourished.

Negro Digest resumed publication in 1961 with Hoyt Fuller as managing editor, and the magazine was renamed Black World in  May 1970, reflecting a changing African American discourse in the age of Black Power. Google's digitization of books and magazines, and especially this collaboration between Google and Johnson Publishing Company gives Black World an online after-life that the periodical may not have had otherwise.

Of course, we have to wonder about the implications of the publishing deal. The publishers of the magazines are apparently profiting based on their relationship with the popular search engine company. But what about the writers? What compensation do they receive? Or, did they sign away any future rights when they agreed to publish the materials decades ago? Those are questions that we might address moving forward.

In the meantime, it's worth considering how a large digitization project made an important, long-gone periodical so easily available again. During the 1970s, the magazine carried the following tag-lines on the back of the issues:

Today, some might reword the last line to read, "Available at Your Favorite Search Engine."

Related:
• Blogging about Black World magazine
Posted by H. Rambsy at 7:07 AM