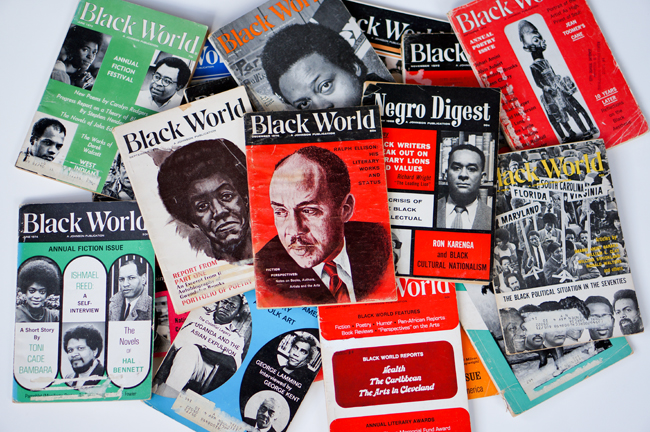 At some point during the late 1990s, I discovered Black World magazine, which had formerly been called Negro Digest. The publication was financed by John H. Johnson, the publisher of Ebony and Jet. Those more widely known periodicals, which I across for much of my childhood in the homes of family and friends, concentrated on entertainment news, celebrities, beauty and fashion, etc. But Black World was on a different order.

Here was a publication that included writings by and about poets, literary critics, militant political figures, novelists, and cultural commentators. There was coverage of various festivals and conferences taking place in the U.S. and in countries in Africa. The publication included a wide range of images -- illustrations, editorial cartoons, and photographs of writers and African art.

Reading through those issues of the publication, I had the distinct feeling that I had somehow stumbled onto some hidden cultural treasures. I don't know; it was this little wondrous black world, and it was called Black World.

Back then, I had no idea that I was going to write a book about the Black Arts Movement and that the book would contain a chapter on Negro Digest/Black World. With no set purpose, I was open to explore.

Related:
• Blogging about Black World magazine
Posted by H. Rambsy at 8:08 AM