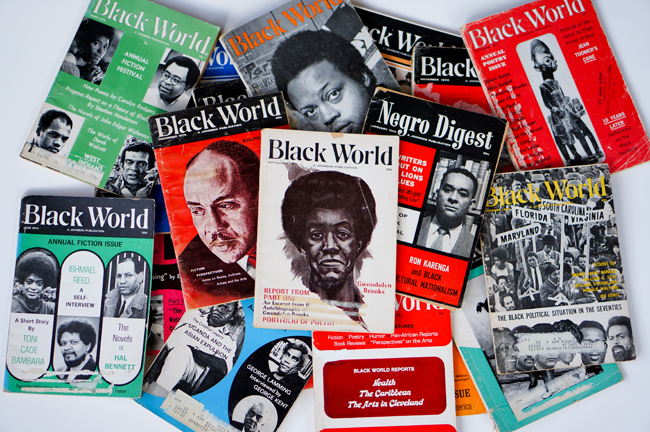 Black World magazine ceased publication in 1976. I first discovered the periodical during the late 1990s. A friend owned a dozen or so issues of the publication. Back then, I was not as fully immersed in African American literary studies and history, so I was mostly perusing with no real direction.

Later, as a graduate student at Pennsylvania State University, I made regular visits to the university library, which had the almost full-run of the publication. As my time in graduate school progressed, I became more aware of several prominent writers and topics; thus, I read with a little more purpose. I wrote a chapter of my dissertation on Negro Digest/Black World, and I later revised that chapter as a chapter in my first book, The Black Arts Enterprise.

Somewhere along the way, I discovered Roots of Afrocentric Thought: A Reference Guide to Negro Digest/Black World, 1961-1976 (1998) by Clovis E. Semmes, which assisted me in my searches for specific writers and compositions from the periodical. In 2003, I met Eugene B. Redmond when I took a job at Southern Illinois University Edwardsville. Professor Redmond owns nearly all issues Negro Digest/Black World. I typically had a specific article or poem from the publication that I wanted to read when I searched through Redmond's collection.

For a few years now, I have utilized the Google Books version of Black World/Negro Digest. I've typically done light general browsing and more often, I have had a clear sense of what I'm looking for when I read. Lately, mainly because of this current project, I have returned to general explorations. Similar to those early days, I'm looking around with no definite plan, not just yet.

However, I am more knowledgeable about various fields (poetry, jazz, history, politics) than I was a decade-and-a-half ago. So I'm likely picking up on more as I browse now than I did back then. Today, it's a more informed exploration.

Related:
• Blogging about Black World magazine
Posted by H. Rambsy at 7:19 AM