When a Baldwin critique of Richard Wright becomes an endorsement 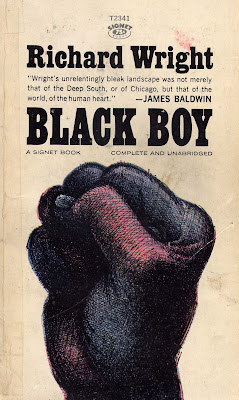 Recently, I was writing about how James Baldwin became integral to endorsements of Toni Morrison and later to Ta-Nehisi Coates. Then, after reading a few comments by Jerry W. Ward, Jr. -- a Richard Wright scholar -- my mind drifted back to an unusual  Baldwin endorsement for Wright.

The cover of the 1963 Signet issue of Wright's autobiography Black Boy includes the following statement:


Wright’s unrelentingly bleak landscape was not merely that of the Deep South, or of Chicago, but that of the world, of the human heart. --James Baldwin

The endorsement is "unusual" because it comes from Baldwin's essay "Alas, Poor Richard," which offered critiques rather than compliments of Wright. Signet apparently figured that in 1963, a statement from Baldwin would resonate more profitably with readers.

Overlook the fact that Wright and Baldwin were far from friendly with each other at the time of Wright's death in 1960, and that the Baldwin was hardly writing  favorably of his fellow writer. When presented as an excerpt, Baldwin's words function as an endorsement, especially when those words appear on the front cover right above a rebellious closed black fist.