The travel writer as poet: the case of Major Jackson 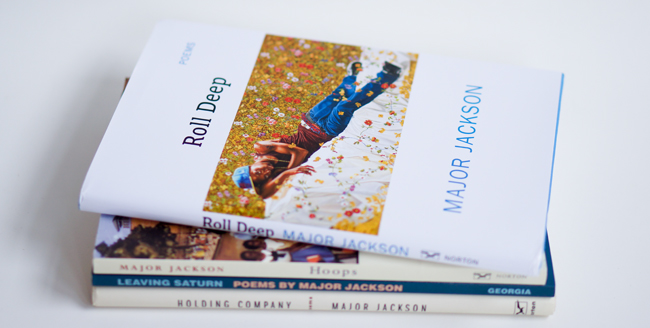 "Since a child, even in sleep, he voyaged and broke free." --Major Jackson

Over the last several years, we've seen articles, conference presentations, and book-length studies on  African American travel writing. Almost all of the scholarship and focus have concentrated on prose writers. But what about poets; don't they produce verse based on their travels?

Enter Major Jackson's Roll Deep (W.W. Norton, 2015). He takes us on multiple voyages. We roll with him to Greece, Spain, Brazil, Kenya, Italy, and various locales in the U.S.

In Greece, he is "hightailing a fast ferry / away from Perseus's birthplace." In Spain, "on the lower slopes of the Sierras, fields / of olive groves braid the land like a Moorish head." He takes us to South America by writing about the Brazilian musical instrument, a berimbau, whose sounds "keeps the buzz on an acrobat's spine" or "silent in a studio--at night especially--before / a bustling round of capoeiristas' flying kicks."

In Kenya, he travels to Dadaab, where he is "unprepared for the drained faces / of famine-fleeing refugees." His "craft's glamour [is] dimmed by hundreds of infant graves." Later, in the section on Kenya, Jackson takes on the persona of a child solider, who explains that:


Before we reached the border,
they gave us uniforms and said we were now
Allah's warriors. We had to tow ammunition.
They turned us into cattle, into human plows.
We laid mines and roadside bombs. We cleaned guns
as big as us.

And then later, he's in Italy, where "even here I look for / a history myself."

I've been reading Major Jackson's poetry for over a decade now; it's cool that in Roll Deep, he's still taking me to new places.