The following word cloud is based on 25 widely anthologized poems. 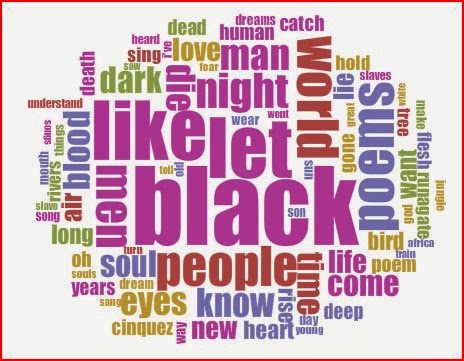 I wasn't surprised that "black" (32 times) appeared the most in the poems. However, I was surprised by "let" (26), appearing so much. In "Black Art," Amiri Baraka writes "Let there be no love poems written / until love can exist freely." In "For My People," Walker writes "Let a new earth rise. Let another world be born." There's Claude McKay's "If We Must Die," which opens with "If we must die, let it not be like hogs."

So I was familiar with those mentions, but I would not have guessed that "let" was second only to "black." The regularity of the word suggests that those poets were urging their audiences to do something. I'll need to run tests on a larger number of canonical poems to see if the pattern persists.

The word "like" (24 times) was a little less surprising when I thought about similes as an important tool for poets. Nonetheless, I suspect that I haven't spoken enough with students about the regularity of "like" in poems. As a result of what I learned from text-mining and that word cloud, I'll be sure to spend more time discussing similes in class, as we perhaps have tended to take them for granted.

In a future entry, I plan to select a few different poets and use text mining software like Voyant to look for other patterns.  Stay tuned.
Posted by H. Rambsy at 9:47 AM