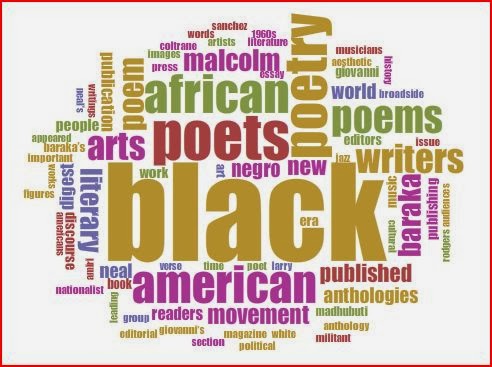 My book is primarily about black poetry and publishing histories related to the Black Arts Movement, where I also discuss black aesthetics and anthologies featuring black poets. Thus, there's no surprise that "black" appears as frequently it does.

But I did notice, if I'm recalling correctly, that the word "whiteness" was far more prominent in the word cloud presented by Koh, whose expertise is in Post Colonial Studies. I assume that it's fairly common for African Americanists to focus far more on "black" topics than on "whiteness," at least in terms of mentioning that specific word. So that's something we might consider: to what extent do we let "whiteness" off the hook by focusing on "black" topics?

My word cloud also reveals my frequent use of "African," "American," "poets," "poetry," and "poems." The "African" and "American" likely appeared together. It stands out to me that "Baraka" and "Malcolm" were also mentioned more than any other individual figures. Given Malcolm's and Baraka's importance to the movement, that might be expected.

Moving forward, I plan to produce word clouds prior to the publication of my projects. Doing so will allow me to rethink my word usage before I even publish.
Posted by H. Rambsy at 10:55 AM

The SBBF is an offshoot of Blue Nile Press (BNP), a Sacramento Publisher of Black Books. This historic event will take place from June 6 - June 8, 2014. It will bring writers, publishers, readers, and vendors from Sacramento, the state, the country, and the international community, to a celebration of reading and writing, right here in River City.

The SBBF will take place in the heart of Oak Park, anchored by venues at the Women’s Civic Improvement Club, The Brickhouse Art Gallery; Evolve the Gallery, Underground Books, Oak Park United Methodist Church, and the historic Guild Theater.