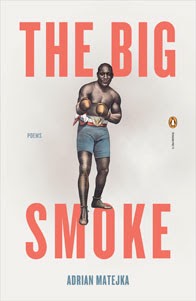 The guys in my class have been enjoying reading Adrian Matejka's The Big Smoke, a volume of poetry about legendary boxer Jack Johnson. We've been reading several "bad man" poems as well as Cornelius Eady's Brutal Imagination and Tyehimba Jess's Leadbelly. On some days while covering The Big Smoke, there's been considerable discussion about this looming figure Jack Johnson, who seems  to serve as a precursor to several contemporary high-profile athletes.

In fact, the overall interest in sports in the class, which is comprised of all first-year black men, has been one reason so many of the students have found the book appealing. On occasion, I wonder if the guys view The Big Smoke as a sports book first and a volume of poetry second.

The guys informed me that prior to our class that had not owned a volume of poetry. That's not surprising nor unusual, as relatively few of my students have ever purchased poetry, especially not contemporary volumes. Beyond the field of rap, the guys in fact had little experience engaging poetry in past classes. So, one way in to Matejka's book was through the world of sports.

Floyd Mayweather, Allen Iverson, LeBron James, Kobe Bryant, Michael Vick, all those cats, I was telling the guys early on, were distant echoes of the showman Jack Johnson. When put that way and while offering various tales of Johnson's exploits, the fellas demonstrated even more active interest in the volume than I've usually seen among students.

To be fair, the bad man angle helps. It's also important that Johnson himself and the Johnson Matejka envisions is so eloquent and braggadocios. Of course, a later challenge involves getting the guys to stretch beyond topics that are seemingly readily available to them.

When we read from the book together in class, we are easily aware that we're reading poems. But there are extended moments in our discussions when we're mentioning Jack Johnson and talking about him and his cars or his problematic behavior toward women in his life or how his presence sparked racist rhetoric and actions from large numbers of white people or how competitive and athletic he was. During those moments, The Big Smoke seems like something other than a volume of poetry.

Related:
• A Notebook on Adrian Matejka
Posted by H. Rambsy at 8:57 AM