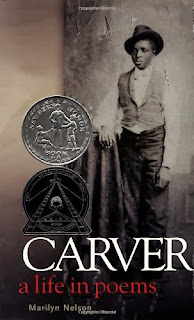 Somewhere at the root of my collection of 208 contemporary volumes of poetry are Marilyn Nelson's Carver (2001), Cornelius Eady's Brutal Imagination (2001), and Tyehimba Jess's Leadbelly (2005). Those were perhaps not the first volumes of poetry that I purchased during the 21st century, but those three definitely prompted me to start building a larger collection.

[Related: An introduction to 208 volumes]

I came across Eady's book about a year or so after it was published. I received Nelson's book as a gift in 2003, and I got Jess's book around the time came out in 2005. I was really compelled by the persona poems in Brutal Imagination and Leadbelly, and the focus on a historical figure in Nelson's volume drew my interest as well.

I started trying to think about connections between those three books and poets and others as well. Over the years, I've observed and acquired books featuring persona poems and historical figures. At the same time, I branched out to other writers linked to the growing number of poets in my collection.

Eady is a co-founded of Cave Canem, and not surprisingly, many of the volumes in my collection are by CC poets. During a reading at SIUE in 2005, Tyehimba Jess read a poem by Gary Copeland Lilley The Subsequent Blues before reading from his own Leadbelly. Shortly thereafter, I purchased Lilley's volume and his other volumes over the years.

Looking back, I've traveled some distance in my engagements with poetry since those initial encounters with Carver, Brutal Imagination, and Leadbelly. But I haven't forgotten my roots nor the routes. Just last week, Nelson's A Wreath for Emmett Till (2005) and Miss Crandall’s School for Young Ladies & Little Misses of Color (2007) co-written with Elizabeth Alexander were two of the featured works in our browsing session. And, one of my classes is now reading Eady's Brutal Imagination and Jess's Leadbelly.