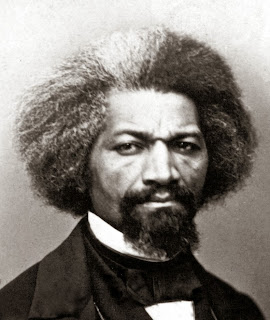 I was pleased to get a copy of Reginald Flood's volume Coffle (2012) and see that among other things, he had published some Frederick Douglass poems. Flood joins a long line of poets who have written about the venerable ex-slave. And Flood in fact extends the possibilities for Douglass poems.

At one point in "Douglass in London 1854,"  Flood notes, in the voice of Douglass, that he will try to avoid recalling some of the troubling events of his life while enslaved. The closing lines are especially notable as Douglass tries "hard not to remember what those ships were for," the ones he worked near and on in the Baltimore ship yards. In his book, Slave Ship, Marcus Rediker explains that slaves in the U.S. were, in a tragic case of irony, forced to work on ships or the materials for ships that would be used for transporting more enslaved people from Africa.

In his "Douglass in London in 1861" poem, Flood presents Douglass critiquing Henry Box Brown who Douglass felt "makes minstrel of his own rescue / for crowds already expecting circus beast." According to Flood's Douglass, Brown presents a "cold and clever freedom" but not a freedom that was "earned night after night" and that recalls the more painful and horrifying aspects of enslavement.

And finally in "Douglass in Cedar Hill," set decades after his escape from slavery in 1838, he explains that he "never understood that after everything those slave songs would still sear the ears / from a rhythm that calls back through pulpit and grave to an uneasy peace."

Flood's poem present Douglass reflecting on his time in slavery and thus add another layer to the growing body of Douglass poems by various other poets, including Paul Laurence Dunbar, Robert Hayden, Evie Shockley, Vievee Francis.


Related:
• Evie Shockley and This Douglass Poetry Discourse
• Marking up Robert Hayden's "Frederick Douglass"
Posted by H. Rambsy at 11:40 AM