The NBA’s Culture of Technology, Intimacy, and Creativity 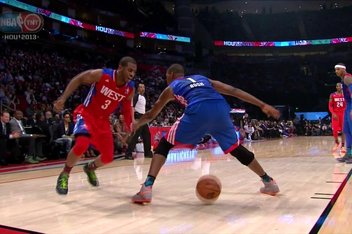 The increasing availability of the NBA through the emergent technology offers a sense of intimacy with teams and players that my parents generation could never have imagined. In this new, intimate era of sports, we have seemingly unlimited access to games, sometimes practices, and even players’ thoughts.

I felt as if I was crossing into the team’s sacred space, meanwhile the video I was watching showed a coach that was violating his players in far more personal ways. Without the technology of online streaming video, I never would have entered into the intimate setting of the Rutgers men’s basketball team practice, but this new technology has created a culture that expects to see these things. It would be more concerning, and more unusual, if they told us there was video but didn’t release it to the public.

I hate the way that video of Mike Rice makes me feel, but that same intimacy is what I love about following basketball in my day to day life. Every outlet of video streaming and news is at my fingertips all day, every day. I can watch last night’s top ten plays on my phone while brushing my teeth in the morning, I can check the box scores of a Thunder game on my way to class, or I can read a Grantland article about LeBron James training with Hakeem Olajuwon on my laptop in the cafeteria during lunch.


********************
We all know this “unlimited” access to NBA players is found online, specifically on a few key platforms. Because of the seamless integration between social media sites – Twitter, Youtube, and Instagram, in particular – we now have a mode of communication that is both personal and near-instant. To say that the newest technology has revolutionized the way we follow sports might be an understatement.

Earlier, I argued that Twitter was more significant than any other website in creating an intimate space between fans and players. Thanks to a discussion with my team of editors, I was reminded that it is the intersection of technological advances that makes Twitter so valuable. Without camera phones, smart phones, and the ability to upload simultaneously to Youtube and Instagram, we might never have found this space – on Twitter – for athletes to publish their personal experiences so frequently and candidly.

A really fun example of the closeness we have available through Twitter occurred a couple summers ago, during the NBA lockout. Star players were showing up across the country for benefit games and pickup ball, and Kevin Durant decided he would pay a visit to the famous Rucker Park in New York City. News broke on Twitter less than twenty-four hours before Durant appeared, and it was videos released on Youtube via Twitter that grabbed the nation’s attention of Durant’s 66-point game.

Even while tweets helped organize a group of fans at Rucker Park that night to watch Durant in person, the social networking site brings an even deeper sense of intimacy with direct tweets from players. I can’t imagine being 8 years old and seeing photographs of Michael Jordan right after a workout like LeBron’s recent post , or seeing MJ before a medical procedure like Kobe posted of himself in the hospital. Here James Harden jokes about doing a Euro-step in the grocery store.

As basketball has come to be known as an increasingly “black” sports culture, the connections between Twitter and the NBA refutes any idea of a digital divide. In fact, nearly 90% of NBA players are on Twitter  and a far higher percentage of African Americans are on Twitter than the percentages of Whites or Hispanics. As we continue to envision what this means for basketball and for culture, we should remember Afrofuturism’s emphasis on the intersections between race and technology.
----------------

As Alondra Nelson emphasizes in her article, “AfroFuturism,” African Americans have a history of experimentation and creative expression that is linked to advancing technologies. Without assuming I know why Twitter is used by nearly one-thirds of the African American population, I can’t ignore the connections between creative expression online and on the court. In the same way that a player creates moves and expresses himself in basketball, fans and players alike have another arena to express their creativity through Twitter.

As I think about creativity in sports, it has to be one of the biggest reasons that I love to watch basketball. In the NBA, everyone is ridiculously athletic and everyone knows what the other players’ tendencies are, so some of the best plays happen when teams and players are creative. For example, watch Chris Paul’s “Top 10 Plays of His Career” on Youtube and enjoy the different ways he handles the basketball to get around, under, or through defenders (poor Tony Parker couldn’t handle Paul’s creative expression twice on this video).

When we talk about creative plays on the court, I can’t leave out Steve Nash. Check out this pass when everyone thought he was trapped in the corner by half-court and this one where he passes behind his back with his off-hand straight to an open shooter. My personal favorite is Nash’s pass between Boozer’s legs – watch the replay and you can see Nash smiling at his own creative skill.

That creative expression on the court translates to social media in many ways. For example, we can read Steph Curry’s joke on his injured teammate, David Lee. We also see Kendall Marshall, who might be the funniest NBA player on Twitter, pretend to discipline his sisters for their music choice.

This creative expression on social media extends far beyond even the words or videos posted, as users can customize backgrounds, color schemes, and profile pictures. It could be compared to Chris “Birdman” Andersen’s colorful upper body or to JR Smith’s 100 tattoos and counting.

What connects Twitter and the NBA most significantly is the way both platforms allow for intimacy and creativity. Basketball fans sit closer to the action and see more of the players’ bodies and expressions than in any other sport, which creates a false sense of intimacy. Just as we feel a personal connection to the players on the courts of NBA games – in this pseudo-intimate space – as we watch their creative abilities, we also experience that creativity through videos and images on Twitter in a similarly intimate, yet physically separate, space.

Related:
The Basketball Project
Posted by H. Rambsy at 9:35 PM