The Case for Kobe Bryant 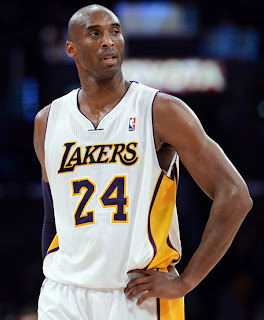 “He's a fan. Just a fan right now.” It was Mike D’Antoni’s emotional response to a playoff-opening loss to the San Antonio Spurs. The Lakers, despite still having two All-NBA big men on the floor in Pau Gasol and Dwight Howard, were unable to break 8o points while the second-string regimen of guards let opposing point guard Tony Parker score at will.

It’s no surprise that following such a fiasco, D’Antoni would have to answer for his own coaching decisions (But seriously, why didn’t you post Gasol against Bonner? WE’RE TALKING ABOUT MATT BONNER!!!). What came as a surprise to the often-doubted coach was the media’s focus on several tweets sent throughout the game by injured superstar Kobe Bryant. His frustration showed in the eye roll and rash description of Kobe’s current position in the basketball community.

A thousand miles away, the aging future Hall-of-Famer was watching the Lakers loss from his home in L.A., launching perceived barbs into the Twittersphere from his living room while wearing a compression boot to stabilize his torn Achilles tendon. To be honest, his comments shouldn’t have been discussed. Right or wrong, Kobe’s critique had no effect on D’Antoni’s in-game decisions, and you would hope at 61 years of age, the Lakers coach could brush off the much-deserved criticism.

But to roll your eyes and say Kobe Bean Bryant is a fan? This is the same player who has logged 45,390 minutes, dropped in 31,617 points, and can put a championship ring on every finger of his shooting hand. Is Bill Russell just a fan? Is Julius Erving?

These are players who haven’t touched a basketball on a professional court since the late 1980’s and yet, when they talk, the NBA and its real fans listen. Kobe will retire in purple and gold, have his name and number raised into the rafters next to the 17 championship banners, billowing forever with names like Johnson, Baylor, West, and Chamberlain. Bryant will likely move on to coach, or participate in analysis and development, or likely do whatever the hell he wants, because as he’s reminded us time and time again, it’s Kobe’s mind over everything that we think matters.

This is what drew me to Kobe from the start. Yes, I had grown up watching the greatest player of all time play during his peak years, but Jordan always seemed detached, ignorantly stubborn, bitter: an asshole. In the 12 years since he last played an NBA game, he’s largely proved himself to be such, summed up in his Hall of Fame speech denigrating his high school coach.

I’m not saying Bryant is free from these qualities. He was involved in a sex scandal and other petty quarrels, but Bryant has emerged from these struggles stronger, better, more aware. Kobe’s most recent catchphrase, Demand Perfection, isn’t just a basketball mantra, it’s a life philosophy for the nearly perfect shooting guard that extends beyond the court.

This is where Kobe exceeds as a role model, and where he has garnered much of my respect. To Bryant, adversity has been a constant war fought on varied battlefields. If it’s not his personal misgivings, it’s his large usage rate, or his turnover ratio, or the fact that he’s not shooting enough, or – heaven forbid – that he’s tweeting his thoughts about HIS TEAM during the NBA Playoffs, hallowed ground for one of the all-time great playoff performers.

And yet, despite all the struggles, the injuries, the critiques, Bryant has completed his 17th season and elevated from the 16th pick in the 1996 draft to one of the best players of all time. Nike has brought us #CountonKobe. Bryant’s longevity has been outstanding, good enough for the most respected athletic company in the world to sell the concept to its consumers as fact.

We challenge Kobe, and Kobe pulls through, proving the Black Mamba’s drive and ambition. Since the foundation of our country, the American dream and American individualism have stood for hard work, personal responsibility, and the rewards that come along with such traits. In a way, Bryant is the on-court embodiment of these ideals.

In 2012, Nike released “The Kobe System,” a series of television commercials and viral ads that highlighted the will to achieve, to succeed beyond success. We often see players lose the drive, the daily motivation to succeed. The heart to perform at the highest level requires energy and focus that few are willing to exert.

For Bryant, who will be entering his 18th season as a professional basketball player in Los Angeles, it has to be tough to maintain the thirst for victory, for success. In fact, thanks to social media, we know it’s difficult. Kobe’s late night Facebook rant said so.

“Now I’m supposed to come back from this and be the same player Or better at 35?!? How in the world am I supposed to do that?? I have NO CLUE. Do I have the consistent will to overcome this thing? Maybe I should break out the rocking chair and reminisce on the career that was. Maybe this is how my book ends. Maybe Father Time has defeated me…”

On Tuesday, April 23, Bryant once again took to Facebook to answer his own question. Posting a picture of his final free throw, following his Achilles tear, Bryant spoke of the motivation he saw in the photo (his defeated face as he put up what he knew would be his last shot of a long and difficult season). Attached to the picture Bryant wrote, “This will be what I look at as I rehab to get back on top. This moment will be my motor.”

This is the difference between Jordan and Bryant. Both are exceptional scorers – two of the most talented basketball players to ever lace up high tops – and both overcome terrible circumstances throughout their lives to reach the top tier of the NBA. Bryant, however, uses the past as motivation to be better and then moves forward, while Jordan, despite conquering every obstacle in the way, continues to stew in the past, stumbling over and over again on the fact that he was cut from his high school basketball team.

As the old proverb goes, only a fool trips on what is behind him. Bryant isn’t tripping. He’s constantly looking toward the next hurdle, preparing himself to jump.

Related:
The Basketball Project
Posted by H. Rambsy at 9:54 PM