Coltrane vs. Thelonious Monk in the sounds of Amiri Baraka 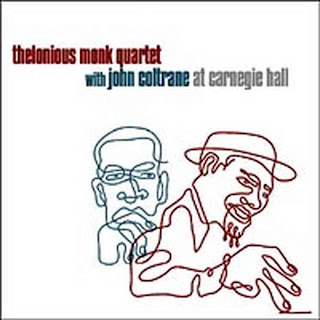 Yesterday over on facebook, my long-time professor William J. Harris raised the possibility that in recent years (which could mean recent decades), Amiri Baraka seems to now draw on Thelonious Monk as inspiration more than on John Coltrane. At first that threw me, as Baraka and Black Arts poets in general have long celebrated Trane as a central muse. But then again...things change.

Perhaps the black arts era of the late 1960s and 1970s required poets to look to a musician like Trane who died in 1967, just as the cultural enterprise was trying to take shape, and thus the saxophonist served as a kind of saintly figure among the poets who were seeking to produce jazz-infused verse. The links between the human voice and what saxophonists like Trane, Albert Ayler, and others were doing at the time -- especially making their horns scream -- likely seemed to be a useful and powerful metaphor for a poet like Baraka who wanted to make sure that he was heard loud and clear. He needed the force of Trane's sound and sensibility to break free from certain Eurocentric modes and also to add those necessary screams to his own poetic delivery.

But after that, after poets and black folks are heard, a little better at least, then what?  Maybe the subtler and sometimes weird sounds of Thelonious Monk made more sense for Baraka. Also, sometimes the circumstances Baraka was facing and ideas he was addressing meant that Monk's music was more fitting. What comes to mind off the top of my head is Baraka's "Somebody Blew up America," a poem that includes conspiracy theories and thus works well with Monk's "Misterioso," which Baraka regularly uses as an sonic epigraph for the poem.

In addition to humming Monk's music to go along with poems, Baraka frequently hums pianist Bud Powell's "Un poco loco" to accompany his low coup poems. Conceivably, the hooks offered by those pianists Monk and Powell are more practically useful for Baraka setting up poems than what he might gain from Trane's solos, for instance. It's also possible that Monk and Powell serve Baraka well too if he's trying to achieve a certain weirdness with his sound and playfulness with work.

More on this topic later.

Related:
A Notebook on Amiri Baraka
Posted by H. Rambsy at 9:59 AM