Africans in India Exhibit at the Schomburg 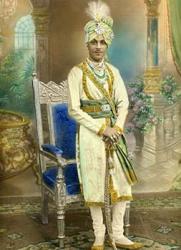 On Monday, May 6, 2013, our NYC crew traveled uptown to Harlem and made a stop by the Schomburg to view two exhibits -- “Africans in India: From Slaves to Generals and Rulers” and artwork by "Loïs Mailou Jones."

Often, when we talk about slavery and the African Diaspora, we do so from the perspective of the Transatlantic Slave Trade from West Africa into the Americas. Seldom do we discuss Africans in the context of the Indian Ocean Diaspora. Th "Africans in India" exhibit was an opportunity to explore “elite slavery” – the Sidis or Habshis, those African men and women who were taken from East Africa (Eritrea, Ethiopia, Somalia, Kenya, and Tanzania).

Some were purchased to perform hard labor, while others worked in domestic settings, especially for wealthy families and sometimes royalty. Many of the men were trained as soldiers, thus making them suitable for the military. In this way, many of the slaves were able to accumulate wealth and power and social mobility despite their enslavement or color. That process is one of the notable distinctions between East and West African slaves and their offspring. One of the notes for the exhibit describes the experiences of the subjects as a “strong testimony to the open-mindedness of a society in which they were a small religious and ethnic minority…as foreigners and Muslims, Africans ruled over indigenous groups of Hindu, Muslim, and Jewish populations.”

The exhibit also showcased a variety of Africans in Indian art. Overall, the exhibit was very informative and provided beautiful photos of some of the rulers and high-ranking African kings and queens like Mehr Lekha Begum Sahiba, Yasmin Mahal and Bamba Muller, who was the daughter of an alleged Ethiopian slave and German banker. I strongly recommend this exhibit, as it is a powerful display of the power, influence, and and significance of Africans to India’s history and culture. It will be on display through July 18, 2013.

***
Danielle Hall is a program coordinator and contributing writer for Black Studies @ SIUE.
Posted by H. Rambsy at 8:47 AM