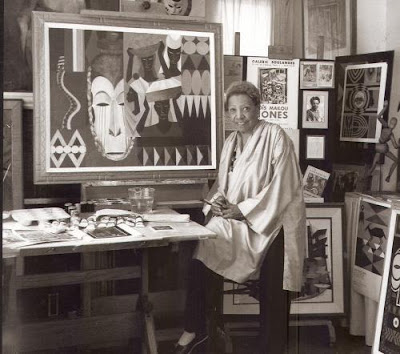 You hear a name, and it sounds familiar. But that day, my brain just couldn’t figure it out.

I walked into the "Loïs Mailou Jones: A Life in Vibrant Color" exhibit at the Schomburg knowing I had heard of this woman before, but it wasn’t in the way I thought it was. That bothered me.

As I walked throughout the exhibit, gasping my life away at nearly every piece, I read that she taught at Howard University for 47 years and “ding, ding, ding” a light bulb goes off. Not only was she this renowned artist, she’s my soror! In 1977, Jones was commissioned by Alpha Kappa Sorority, Inc., to design the commemorative Founder’s Window in the Andrew Rankin Memorial Chapel on the campus of Howard University, where the sorority, founded in 1908, became the first Greek-lettered organization for African American collegiate women.

This fact aside, I was instantly fascinated by her use of bright colors, asymmetric and geometric symbols, but most of all the ways in which she captured African and Haitian life in pieces like Mére du Senegal, 1985, The Water Carriers, Haiti, Damballah, 1980, Vévé Vodou II, 1962 and Vévé Vodou III, 1963.


Two pieces that absolutely struck me as astounding were Mob Victim (Meditation), 1944, which captures the historic brutality and often violent treatment of black men and her oil painting of African American soprano opera singer, Life Portrait of Madame Lillian Evanti as Rosina in "The Barber of Seville", 1940. Since I couldn’t take photos inside the exhibit, I’ve provided a link so you can view some of her awesome artwork here. The Schomburg exhibit is open through June 29, 2013.

Her list of awards and accolades goes on and on, but something to note is that in 1946, Jones was one of twelve women to receive an award by the National Council of Negro Women (NCNW), which was presented by Mary McLeod Bethune. Here and there, I’ve heard about the field needing more historians to document African American art history and this is one exhibit that opened me up to that. I left that exhibit telling myself she would be a fascinating lady to study.

***
Danielle Hall is a program coordinator and contributing writer for Black Studies @ SIUE.
Posted by H. Rambsy at 9:02 AM