The value of a small scholarly gathering 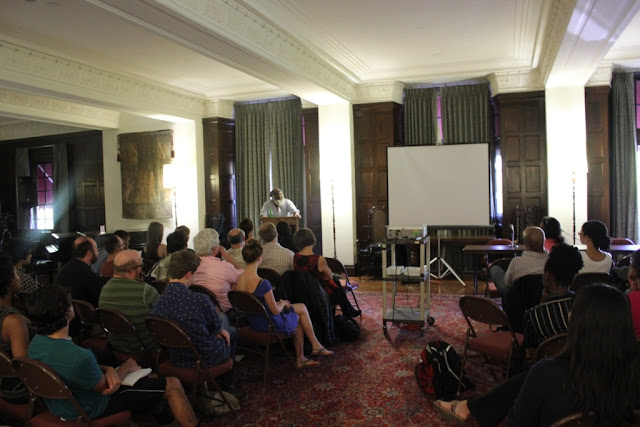 We need more small gatherings in the field like the one Courtney Thorsson organized at the University of Oregon on April 26. Such gatherings enable necessary time for scholarly conversations and adequate question and answer sessions. A symposium like this one also prompted some of us to showcase broader aspects of our projects than in other venues.

I encounter more people in passing at larger conferences; however, I ended up having more extended conversations about African American literature and various research projects with a larger number of people at this smaller gathering. The moments before, between, and after the sessions made it possible for me to cover a range of topics with some degree of depth with presenters Anthony Reed, Matt Sandler, Evie Shockley, Erica Edwards, and David Bradley, as well as with some of Thorsson's colleagues and graduate students in English and media studies at the university.

There were two main panels at the symposium, and the question and answer sessions for both panels lasted over 30 minutes, something that rarely happens at typical large conferences. There's simply not enough time to fit in Q and A for more than 10 minutes in most cases at conferences. That's notable too since so many attendees regularly remark that "the Q and A is the best part."

This symposium format gave me the chance, or really prompted me, to talk about a larger project and more writers at one time than I usually do at regular conferences, where I'm inclined to focus on perhaps one writer. For my presentation on Friday, I concentrated on the careers of 4 writers, and I mentioned them in the context of more than 20 of their contemporaries. Since I was one of the few presenters, I was inclined to produce this series of entries and resources related to the presentation prior to the event.

To be fair, there are multiple reasons why we don't have more small symposiums on African American literature. For one, there's the challenge of funding. Larger conferences have more people and longer histories and thus more sources of revenue. Second, we'd need more scholar-organizers in the field like Courtney Thorsson to make such events happen. By and large, graduate students and then literature scholars are not trained or socialized to organize symposiums. We are more likely to attended regular conferences and give, hmmm, regular papers.

I've attended several (perhaps too many) larger conferences over the last 10 years. Although large conferences are important for many reasons, a symposium like this one provided key advantages for sharing, developing ideas, and rethinking what it is we might do when we get together for scholarly gatherings of any size.