Evie Shockley and the Music 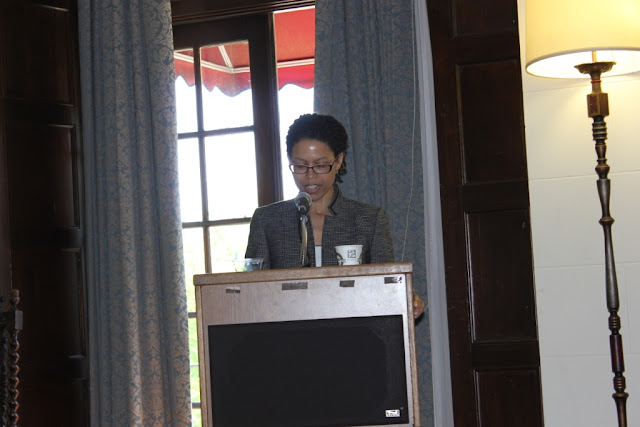 During her reading of "post-white" at the African American literature symposium at the University of Oregon, I somehow assumed Evie Shockley was reading an unpublished poem. Her live version of the poem includes singing,which gives the piece sonic qualities and melodies that are less evident, at least to me, on the page. Actually, "post-white" appears in Evie's the new black, a volume I thought I knew quite well.

Hearing Evie live had me thinking that I hadn't been reading her creatively enough on my own. Or, I haven't been stretching out enough to also listen to how she sounded reading poems for the volume out loud. Sometimes you have to hear a poet to, well, hear her.

My crew and I had been having an extended conversation about what Evie does on the page, with poems like "x marks the spot," “mesostics from the american grammar book,” "a sonnet for stanley tookie williams," "dependencies," and "explosives." In addition to keeping an eye on the visual aesthetics of her poetry, I'm also inclined, moving forward, to pay closer attention to what Evie does with the music.

Speaking of the music in her work, listening to Evie reminded me that I also have to attend a little more to her playing...that is, the playfulness in her works. In class and our side discussions of her work, we frequently discuss the serious topics of the poems. That's there. But what's far more evident when listening to Evie alluding to and signifying on songs and music in her work is the ongoing humorous and mischievous engagements.

Many years ago, I was at a reading where Amiri Baraka was speaking about Margaret Walker. He noted that he had read her famous poem "For My People" for over a decade one way until he heard Walker reading it herself and putting a the stress on "my" differently than he had, which led him to view the poem in alternative ways. Hearing Evie Shockley at the reading in Oregon gives me more reasons to hear and read her in new and alternative ways.