What scares black students in a black poetry course 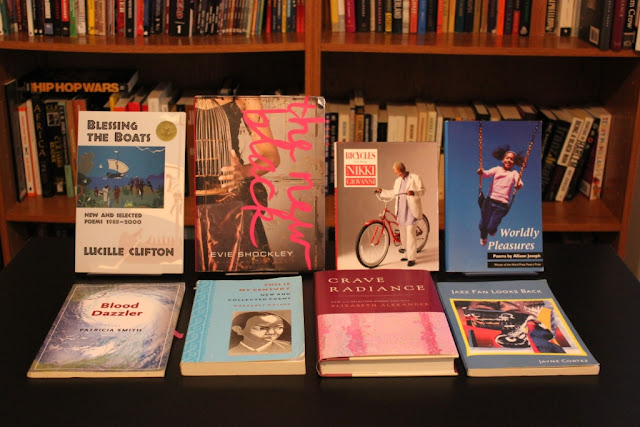 Over the years, I've discovered that the fear of being perceived as "dumb" is one of the persistent worries among African American students in my black poetry courses. My courses are among the only ones at the university that enrolls a majority of black students. So the fear, in large part, relates to how black students think they will be viewed by other black students.

Our coverage of a large number of black poets and African American subject matter creates an unusual experience for many of the black students. There's an expectation, they feel, that they should have considerable knowledge about what we are covering. It's understandable, many of them think, that white students know so little about African American culture and history, since they are white. But, what excuse do black students have, the line of thinking goes, for not knowing about black culture and history?

Each semester, black students approach me privately to express their frustration and anger that their high schools and other college courses have never covered issues related to black people and African American poetry in-depth. Many have noted that they are fearful and embarrassed to speak up more in class because it might become evident how little they've been exposed to regarding "our own people." In many respects, the black students put far too much pressure on themselves to already know about a broad, complex body of black-related subject matter.

The fear emerges too among many that when and if they do speak up in class, their words will betray them and suggest that they are not college material or, even worse in their minds, that they are "ghetto." No black person wants to feel like they are confirming all the stereotypes about black people being unintelligent and ungrammatical. And the younger ones do not want to be considered uncool. Confronted by those unfortunate pressures and fears, so many of them decide to remain silent and pray that I don't call on them in class discussions.

Related:
What scares White Students in a Black Poetry Course
A Notebook on Fear of Language
Posted by H. Rambsy at 10:03 AM

I hear you, Prof. Rambsy -- loud and clear! And I'm really interested in the implications for high school curricula. So many teachers are fearful of allowing the conversation to become too controversial, and so topics that might excite (or confuse or discomfit) students (esp., about race, gender, and sexuality) are left out of their courses. It's less intimidating for the teacher to read TO KILL A MOCKINGBIRD with students, and let Lee's novel cover "racial issues" for the year.... The omission of more radical voices speaks volumes. I think the key is a fully integrated curriculum, which I do realize is a relatively obvious response. In other words, I advocate not for a few lessons on Black poets during Black History Month, but rather for thoughtful, theme-based units that speak to myriad experience, as in a coming-of-age thematic approach that crosses literary-cultural lines. I've been pushing plays, narratives, and novels by Cisneros, Alexie, Douglass, Twain, Hurston, Austen, Lahiri, and Shakespeare (HAMLET), for example....