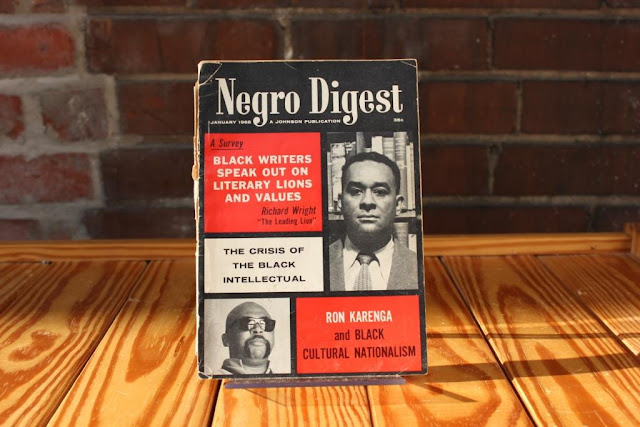 During the fall of my sophomore year at Tougaloo College in Mississippi, my professor Jerry W. Ward, Jr. began making me aware of the wide, wide world of Richard Wright, and in the spring of my junior year while participating in an exchange program at New York University, my friend Alondra Nelson introduced me as a "Wright Scholar" to a group of people at gathering. Becoming aware of the author's powerful works and earning the label "Wright scholar" (years before I was a real Wright scholar) were pivotal moments in my intellectual development and academic career. When I arrived at the January 1968 issue of Negro Digest and spotted my guy Wright on the cover, I was intrigued, and yes, one of my key literary interests was validated.

That 1968 issue of Negro Digest included the summary of a survey that editor Hoyt Fuller had done polling 38 black writers about their values, literary models, and a then developing concept known as "a black aesthetic." According to Fuller, more than half of the writers who were polled identified Wright "as the most important black American writer of all time."

That issue of Negro Digest further acquainted me with writers, texts, and ideas associated with the developing cultural movement,  including Henry Dumas, Ron Karenga (later Maulana Karenga), Don L. Lee (later Haki Madhubuti), Henry Dumas, Harold Cruse and The Crisis of the Negro Intellectual, Carolyn Rodgers, and Larry Neal who memorably wrote that "There is no need to establish 'a black aesthetic.' Rather, it i important to understand that one already exists."

For many reasons, that 1968 issue of Negro Digest quickly became an important black arts artifact for me.