I was recently looking over an old letter from a friend, Jean Hutchinson. She passed away back in December 2008. We used to exchange letters about poetry, and we often marked things up to make points and assist each other in "cracking the codes," as she put it.

Since I was thinking about Jean today, I decided to go through the process of marking up one of my favorite poems and documenting the process in somewhat step-by-step fashion.

I chose Robert Hayden's "Frederick Douglass," and started with this copy. 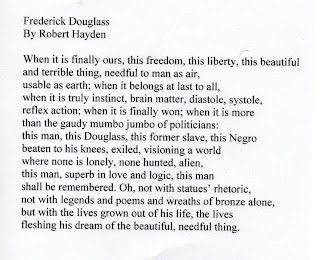 Here are my first markings.


In that first series of markups, I started with some numbers. I date Douglass’s and Hayden’s birth and death years. I also counted the lines of the poem.


For the next markups, I circled words that caught my attention. Who was the our of “ours,” and how could "this freedom" also be "terrible"? Diastole and systole relate to the heart. The phrase “mumbo jumbo” of course got me, which operates as a critique of politicians. I thought on that with “rhetoric” in line 11.

I also liked “visioning,” next to which I wrote “AF,” for afrofuturism, which is a way, among other things, of thinking about African American approaches to speculative narratives or sci-fi. Visioning is certainly a way of speculating. I also linked “alien” to AF.

My students and I often talk about word choice, which I tend to mark with “w.c.” on their papers when I want them to reconsider a word that they’ve used. But at points on the Hayden poem, I wrote “g.o.” for “good one” where I thought the word choice worked well. “Visioning” and “fleshing” were two examples.


In the third round of markups, I moved to thinking about phrasings and style. I started counting how many times “this” shows up in the poem, as in “this freedom, this liberty” and later “this man, this Douglass.” The word “this” appears 9 times. I double underlined “needful” and “beautiful,” both of which appear twice in the poem.

I put some phrases in brackets that I appreciate such as “truly instinct,” “reflex action,” “love and logic,” and “the lives grown out of his life, the lives fleshing his dream.”

In addition to spending some time thinking about what Hayden was up to presenting the words and phrases as he did, I noted them so that I could consider why those phrasings matter to me, why and how they move me and catch my attention.


In the final version of markups, I wanted to note things that could lead to different, beyond-the-poem conversations and explorations. I put check marks by the words “slave,” Negro,” “lonely,” “exiled,” and “alien.” I then wrote the words in a list to the side. I want to spend some time thinking about the ways those words connect and diverge. I’ve read and discussed Hayden's poem for years now, but had not thought enough about the relationships among those words in particular until I started marking up the poem.

I also took a note to think more on Douglass’s “dream” or on Hayden’s view of Douglass’s dream.

At the top, I identified a few other poems by Hayden--“Middle Passage,” “Runagate Runagate,” “Those Winter Sundays,” and “The Whipping.” At the bottom, I noted other poets who’ve written about Douglass such as Paul Laurence Dunbar, Dudley Randall, Evie Shockley, Vievee Francis, and Tim Seibles.

My handwriting and all the marks ups aren’t so pretty, but the process did bring me even closer to Hayden's poem.

Related content:
25 Things to do with Robert Hayden’s “Frederick Douglass”
Posted by H. Rambsy at 2:13 PM