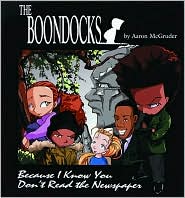 At one point, wasn't Huey Freeman, one of our most well-known or at least widely read black public intellectuals? Sure, he was a cartoon character and the creation of Aaron McGruder. But still, there was something about Huey.

The Boondocks, and now I'm referring to the comic strip, was picked up for national syndication in 2000. Folks, from across the country, were getting exposed to Huey's thoughts on rap, history, movies, black folks, white folks, some of everything...every day.

"You saw what Huey said in the paper today?" someone would ask and then describe some joke from the comic strip.


As far as fictitious little boys in popular culture go, Huey wasn't Harry Potter big, but he was still pretty big. Plus, he was militant. He talked race and politics.

There were folks likely more familiar with Huey's musings than Cornel West's, right? People knew more about what Huey thought about fighting oppression than bell hooks and Angela Davis. Michael Dyson is, no doubt, a notable hip hop scholar, but Huey's critiques of rap culture were far more known.

The 10-year-old black boy protagonist and by extension McGruder really stood out in the traditional of black public intellectual radicalism during those months soon after 9/11. He was one of the earliest popular critics of the war in Afghanistan; he was one of the early, popular critics of how the Bush Administration and the U.S. media were responding to terrorist threats.

In retrospect, Huey was clearly a leading, powerful voice of dissent. By many definitions, he was somehow a notable black public intellectual.

Related content:
The Boondocks, and uhh, Black Studies
Why Huey vs. Riley Matters
Huey Freeman vs. Intellectual Solitude
Posted by H. Rambsy at 10:55 AM